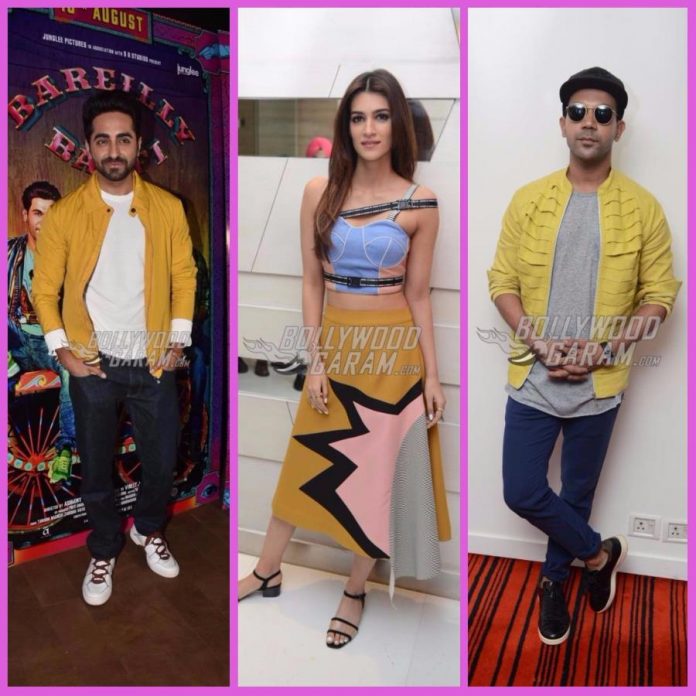 The trailer of the film Bareilly Ki Barfi has already left the audience wanting for more. The makers have now dropped the song Sweety Tera Drama from the film which stars Kriti Sanon, Ayushmann Khurrana and Rajkummar Rao on July 24, 2017. The first song from the film seems interesting and features the lead actors of the film.

The song has been composed by Tanishk Bagchi, written by Shabbir Ahmed and sung by Dev Negi, Shraddha Pandit and Pawni Pandey. The film Bareilly Ki Barfi is directed by Ashwiny Iyer Tiwari and produced by Junglee Pictures BR Studios. The upcoming romantic comedy flick is ready to be released in theatres on August 18, 2017.

Also checkout the poster of the movie!

Ayushmann was last seen in the film Meri Pyaari Bindu which also starred Parineeti Chopra. The film could not impress the audience and thus performed poorly at the box office. Kriti was last seen in the Sushant Singh Rajput starrer Raabta, which also failed to draw the audience at the theatres, resulting in poor box office collections. Rajkummar Rao, is notorious for blowing audience’s minds with his supporting roles in Bollywood. He was also seen as the lead in the film Trapped, which was a story about a man who is trapped in his apartment for more than a month, without food, water or electricity.