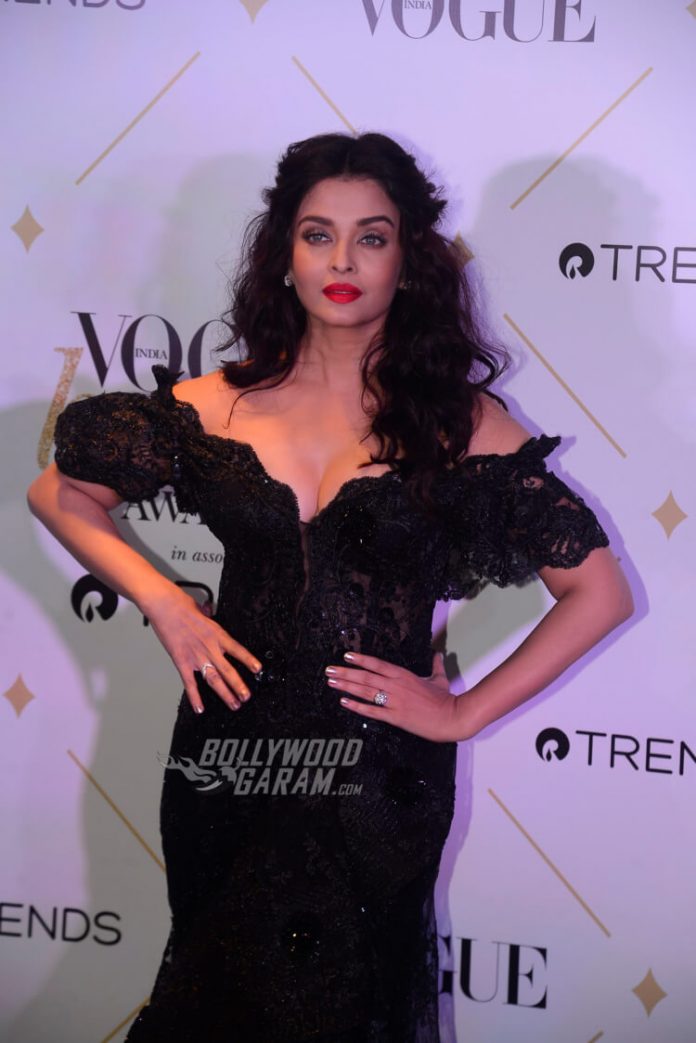 The Vogue Beauty Awards on August 2, 2017  witnessed the who’s who of B-Town come together in their most jaw-dropping avatars and stunning looks. The Bachchan family could easily be said to be in their glam best on the red carpet as senior Bachchan accompanied the women of his family, viz. wife Jaya Bachchan, daughter Shweta Bachchan, grand-daughter Navya Naveli Nanda and daughter-in-law Aishwarya Rai Bachchan. The Bachchan bahu decided to go the bold and beautiful way as she donned a black off-shoulder sheer Nedret Taciroglu gown with blood red lips, Jimmy Choo pumps and open hair parted at the centre. Her elegant demeanour was matched with that of her family as niece Navya Naveli graced the event with a silver gown laden with embellishments; Shweta Bachchan looked vibrant in yellow and the Bachchan couple proved that age is just a number.

Time and again Aishwarya has stunned her audiences on the red carpet and award ceremonies, and this time too, she hit the bull’s eye in her million-dollar lace dress and an enchanting confidence. The entire Bachchan family won awards with Shweta, Jaya and Navya Naveli winning the Ageless Beauty Award and getting featured on Vogue magazine’s August 2017 cover as well. The former Miss World, meanwhile, bagged the Beautiful Global Indian Icon award, transforming her role as quite the international trendsetter in fashion.

Take a sneak-peek at this year’s Vogue Beauty Awards winners:

No wonder she is the Global Indian Icon for Vogue!

T1764- The most beautiful women in the world #AishwaryaRaiBachchan arrives in black ruffles at Vogue Beauty Awards 2017 . @juniorbachchan pic.twitter.com/LLipOPUZEc

A class apart – he is certainly the ‘Most Beautiful Man of the Decade’!

These three women have upped the ante with their ‘Ageless Beauty’

With that charming look, he was sure to win the ‘Most Beautiful Man of the Year’ Award:

Amit ji wins the #TheUltimateLegend award at the Vogue Beauty Awards 2017. We had no doubts about that! Congratulations sir? pic.twitter.com/iGHAeF5Di5