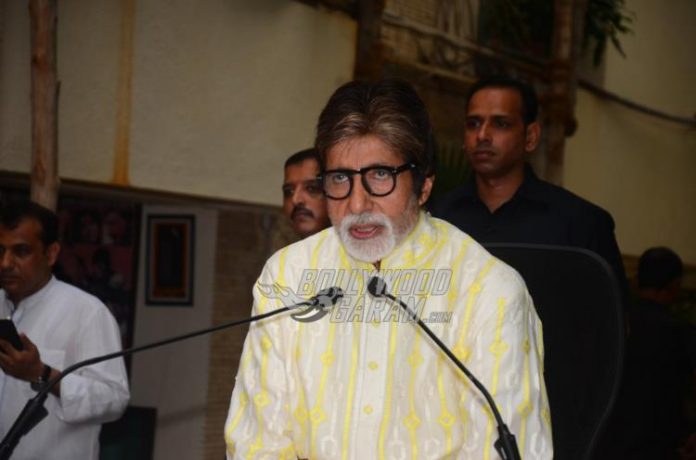 The 50-day deadly internet sensation has claimed one young life already; Big B warns against the potential dangers of the world wide web and its threat to life

It has not been long since the Blue Whale Challenge has spread its shackles on the Indian teens but July 30, 2017 marked the day when a 14-year old school-goer in Maharashtra committed suicide to fulfill the last challenge of the ’50-day dreadful challenges’ that this online video game convinces the teens to take up.
Concerned about the ill-effects of the Blue Whale Challenge and how the internet is able to brainwash children so much so that they are ready to give up on their precious life, Big B tweeted on his social media account: “Life is given to live, not give it up before time.”

T 2504 – Reading alarming news on a dangerous internet game being played by the young ! Life is given to live not give it up before time ! pic.twitter.com/Ibhw5KtebE

Meanwhile, Rajya Sabha has demanded action against the widely and rapidly spreading threat of the virtual game as 130 people have already given up their lives in countries like America, Russia, Italy and England that have seen the first occurrences of the danger lurking in the dark side of the web.

How the Blue Whale Challenge is a potential threat to life

The initial challenges seem innocuous and almost like playful pranks as they instruct the teens to “travel without a ticket in train” or “watch a horror movie and psychic movies at night all by themselves” but the game becomes scarier, more threatening and psychologically disturbing with each challenge. Manpreet, the school boy who was the first victim of the Blue Whale game could not be saved but if teachers and parents act as watchdogs, the danger lurking on our computer screens could be warded off.

The school boy had reportedly texted one of his friends before jumping off a building, but his warnings regarding not attending school any further had not been taken seriously. Had his actions and recent behavior been checked, he might have been alive. While parents might need to divert the attention of their teen kids to other online games that can be played with as much addiction and interest and carefully observe if their kid is going through some self-esteem or peer pressure issues; the legislative bodies can meanwhile take up the responsibility to disrupt the web off such evil games that instruct the players to first draw a whale on the paper and then draw it on their bodies using needles and blades.