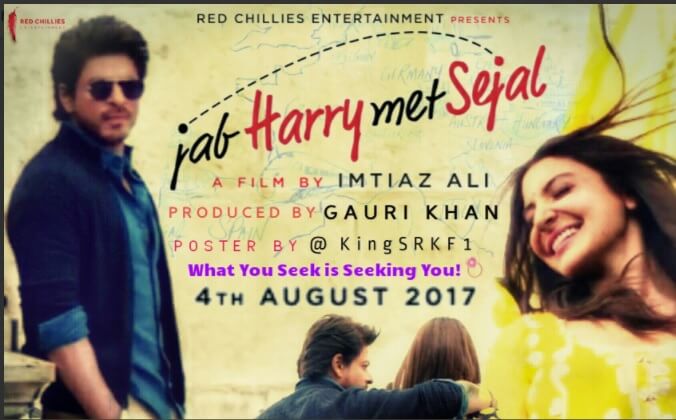 Imtiaz Ali has done it again. If you are thinking that he has come up with a successful and interesting rom-com, you cannot be more wrong. He has repeated himself in showing an already engaged girl being wooed unexpectedly by a random boy she starts spending too much time with. Jab We Met, Love Aajkal, Tamasha and now Jab Harry Met Sejal (JHMS) follows the same pattern. However, this time the Sufi-spirited director has weaved a lot of picturesque locations in Europe with bits and pieces of lush greenery of farms in Punjab, and a mushy affair between the co-stars where the strong, independent and confident mask that Anushka pulls off in the first half is soon seen to be fading in the second half of the movie with her constant urge for a validation of her beauty and sex appeal from SRK.

Shahrukh (Harry aka Harrinder Singh Nehra) and Anushka (Sejal Zhaveri) take frequent jabs at each other – SRK at Anushka being a “nice, sweet and sister type” while Anushka being the snooty money-minded and vivacious kind who loves picking on SRK’s Punjabi ways and romantic inclinations for other women, before they finally hit it off with their romance that is best expressed in songs like “Main bani tera Radha” and “Hawayein” among others.

It is not so much of an intense soul-searching movie like Rockstar or a deep understanding of each other’s real calling and strengthening the bond between the co-stars as much as it is a separate journey for the two. For Shahrukh, he understands the meaning of love and importance of a single significant relationship  for someone who has proudly been the womanizer before falling for Anushka ; the latter finds happiness, freedom, solace and her own free will in breaking stereotypes by discovering her ‘true love’ for a tour guide (Shahrukh, of course) despite being engaged to Rupen.

It’s a pity that the story of JHMS does not match the expectations that one has from an Imtiaz Ali direction and neither does it do justice to the cinematography skills of K.U. Mohanan or the music composed by Pritam.

All in all, the movie is worth the watch only if you are a diehard SRK fan, a rom-com aficionado or love the chemistry between the Rab Ne Bana Di Jodi actors.