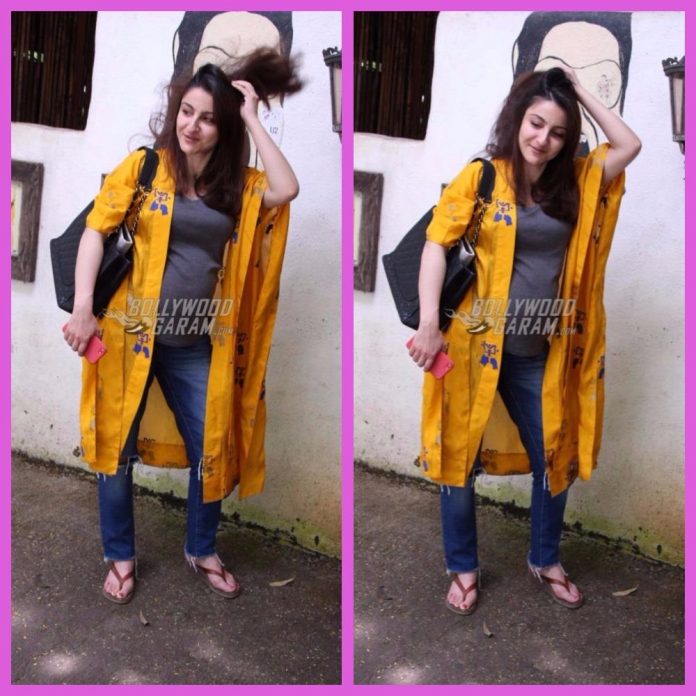 After Kareena Kapoor, Soha Ali Khan is perhaps one of the most outgoing actresses, who never had any inhibitions and is showing off her stylish avatar even during pregnancy. Soha has been open about her pregnancy since the beginning and has kept her fans updated about every stage that she has gone through so far. The actress was snapped outside a hair salon in Mumbai on August 6, 2017.

Soha looked cool, happy and gorgeous as she came out of the salon and posed for the shutterbugs. The Dil Maange More actress was seen flaunting her baby bump in a grey tank top, a pair of ripped denims and a long mustard color jacket. Her maternity style was indeed impressive. Soha in an interview was asked if she would be working throughout her pregnancy phase like sister-in-law Kareena Kapoor, to which she said, “I am going to see how it goes. It’s difficult to say now but it’s definitely possible. I have seen not only Kareena (Kapoor Khan, Soha’s sister-in-law), even my mother (Sharmila Tagore) was shooting right until her seventh month. So it all depends. If all goes well, I would take on as much as I can. But if I get tired or unwell, then I won’t want to overdo it.”

Kareena Kapoor and Saif Ali Khan are parents to a baby boy Taimur Ali Khan born on December 20, 2016. The Chameli actress was appreciated for her style during her pregnancy phase and also continued to work till the last moment.