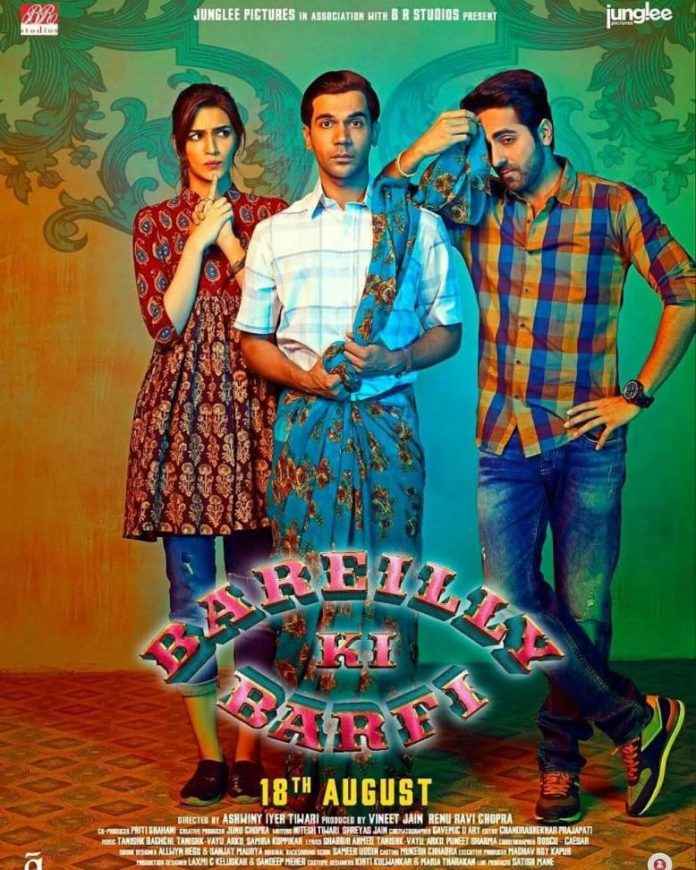 Since the lead actors Ayushmann Khurrana, Kriti Sanon and Rajkummar Rao are busy with promotions of the upcoming film Bareilly Ki Barfi, the makers recently released a new poster of the film. The social media handle of the film showed a new poster which has shown Rajkummar Rao in a sari, Ayushmann lost in thought, while Kriti Sanon looks confused.

The poster had the caption, “Chirag hai pyar ki khoj me, Bitti apni hi soch mein aur Pritam Vidrohi in a saree bina petticoat mein. New poster from #BareillyBarfi.” The upcoming film has inspirations from the book, The Ingredients of Love, a novel by a French author Nicolas Barreau.

The film is directed by Ashwiny Iyer Tiwari, while husband Nitesh Tiwari has written the film. The filmmaker was in the advertising industry for 15 years after which she made her first short film Breakfast in 2012, for which she won the Dadasaheb Phalke Award. Ashwiny made her debut in filmmaking with the 2016 film Nil Battey Sannata. The story of the film has three interesting characters Chirag, Pritam and Bitti played by Ayushmann, Rajkummar and Kriti respectively. Bitti is in search of her life partner while Ayushmann and Rajkummar try to pull down each other as they try to compete to win Bitti’s love.

Nitesh, while talking about the film said, “Well, in this kind of story, dialogues and quirky characters are important and yes it was well written. So, as a film director, it becomes my utmost important duty to make sure I am doing justice to their effort.” The trailer of the film has already made things more interesting for the audience, who cannot wait for the movie to be released. The songs of the film have also become popular and the movie is ready to be released in theatres on August 18, 2017.