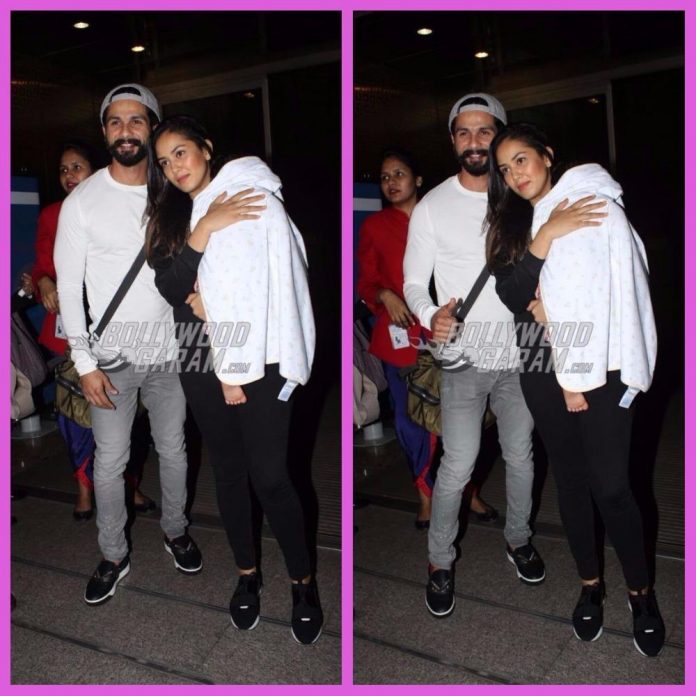 Shahid Kapoor, wife Mira and their daughter are once again off for a vacation. The happy family was photographed at the airport and looked happy as they took off for the holiday where they will be celebrating their daughter Misha’s birthday. The Kapoors have now skipped plans of a grand birthday party for Misha, who will turn one on August 26, 2017.

Shahid looked dapper in a white pullover and a pair of grey denims, Mira appeared in a black outfit. Little Misha was wrapped in a white baby blanket and seemed asleep. The Rangoon actor, while talking about his daughter’s birthday celebrations said, “She is very small. She will not understand what a party is nor will she remember it. It is not fair to subject the child to that. We are probably not going to be in the country. We are going to be abroad and will have family time.”

Mira and Shahid have been in the news since the time they got married. Shahid went the arrange marriage way to have a family and married Mira Rajput, a Delhi based girl who is about 15 years younger to him. As time passed, Shahid and Mira proved to be a great couple and were often photographed on holidays and spent quality time despite hectic schedules.

The couple became parents to a daughter Misha on August 26, 2016. Shahid, in an interview with a leading daily, said that his wife Mira had a tough pregnancy. The Jab We Met actor and Mira will now be spending some cozy family time on Misha’s birthday.