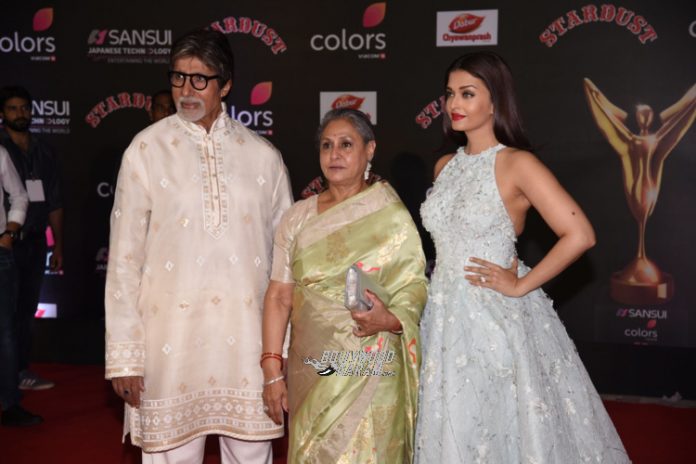 Jaya Bhaduri Bachchan has proved her mettle in films both in 1970s-80s and in the 21st century. She is one of the finest actresses Bollywood has ever known.

An iconic figure, a popular veteran actress and the living legend, Amitabh Bachchan’s wife, Jaya Bhaduri Bachchan had been quite a successful star when she got married on June 3, 1973. 44 years hence, Jaya is a noted politician and a doting mother to actor Abhishek and columnist Shweta Bachchan. Recently in news for featuring in Vogue India’s August 2017 cover with daughter Shweta Bachchan-Nanda and granddaughter Navya Naveli Nanda, Jaya is also the proud winner of Vogue’s Ageless Beauty Award.

On their 44th wedding anniversary this year, Amitabh took to Twitter to share a wonderful picture with his wife reminiscing the day of their wedding and the memories it brought forth.

He also shared in his blog post how on his wedding day, there had been a massive downpour and their neighbours believed the rain to be a good omen.

Love had blossomed between the two even before they were married. Big B’s earlier adorable throwback picture where he shared a still from Zanjeer (1973) showed Jaya feeding Amitabh with her own hands. They have co-starred in several evergreen Bollywood films like Ek Nazar, Bansi Birju, Abhimaan, Chupke Chupke, Sholay, Silsila, Zanjeer and Kabhi Khushi Kabhi Gham (K3G). But the talented jodi’s graceful and overwhelming presence has been quite the talk of the town time and again during award shows, ad endorsements and the family’s pictures together.
In over four decades of togetherness that this celebrated couple has enjoyed, Jaya has been quite the pillar of strength, patience and care that has kept the family together even during tough times and more than anything, helped the couple grow and evolve with the passing years.

Their romance still stays strong and effervescent and a glimpse down the memory lane through their movies together brings forth the beautiful and vivacious relationship that they shared on screen.

One of the finest actresses of the Hindi film industry, 69-year old Jaya was a natural when it came to her acting style and skills. Though many of her noted movies starred Big B, she was already an established actress even before the latter made his mark in B town. Winner of eight Filmfare awards, she has been the prestigious owner of three awards for Best Actress category in Filmfare and three more for Best Supporting Actress category. Jaya can be safely called the most valued and acknowledged actress at par with yesteryear actresses like Nutan. She was also appraised with the Filmfare Lifetime Achievement Award and the Padma Shri for her valuable contributions to the Hindi film industry.

Joining the Hindi film industry at the young age of 15, Jaya got her big break in Satyajit Ray’s Mahanagar and since had been the popular choice for lead roles in eminent filmmaker’s movies. Her role in and as Guddi directed by Hrishikesh Mukherjee and her performances in movies like Koshish where she plays a deaf and dumb woman alongside Sanjeev Kumar, Kora Kagaz and Uphaar were noteworthy and have received rave reviews.

Her marriage and family life though made her take a back seat with films, she has been the prestigious winner of several nominations and critical acclaims for her prominent roles in later movies like Kal Ho Naa Ho( 2003), Fiza (2000), K3G (2001) and Hazaar Chaurasi Ki Maa (her comeback movie in 1998) that revolved around the Naxalite movement. Jaya has always been known for taking up versatile and powerful, tough roles in movies and for acing the role with her stellar acting talents. A notable mention here would be the Bangladeshi film, Meherjaan.

Jaya has also been honoured with the best parliamentarian award this year and continues to be an influential Rajya Sabha member, apart from being a revered figure in the tinsel town.