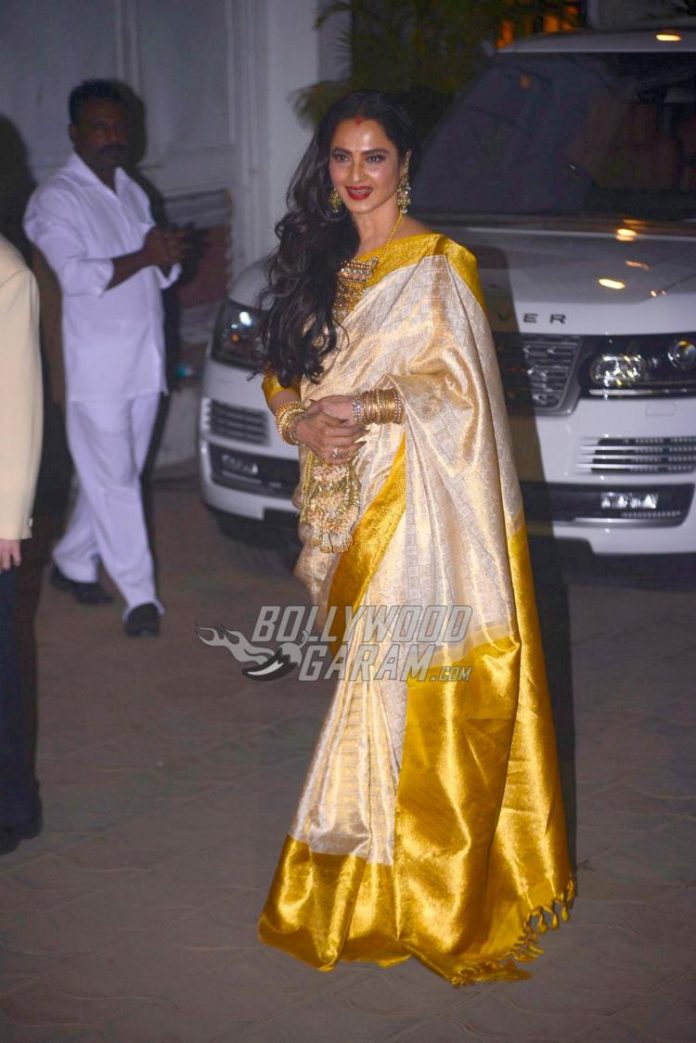 No other Bollywood actress has quite seen a disturbing personal and professional life like Rekha and yet come out shining like a diamond.

The moment you’re a star, you’re no longer normal. That’s a curse you’ve got to live with.

A loner by confession, a brilliant actress, full of life and vivaciousness in her younger days who slowly turned into a recluse and stopped making public appearances, Bhanurekha Ganesan better known as Rekha has gone through a lot of tough times in her childhood, teenage, professional sphere and personal zone. Rangula Ratnam was her first Telugu movie but her Bollywood debut in a lead role happened with the movie, Sawan Bhadon.

It was Rekha who brought the glitzy and glamorous as a style statement in the tinsel town. Performed in both mainstream and parallel cinema, she has three Filmfare Awards for Best Actress and Best Supporting Actress categories, apart from a National Film Award for Best Actress for her powerful performance as a courtesan in Umrao Jaan. She recently won the 3rd national Yash Chopra memorial award and was last seen in Sharman Joshi starrer, Super Nani.

Rekha has bravely undergone ups and downs in her career where co-actors, directors, media and the Indian movie-goers reportedly took digs at her and shamed her for her controversial life as a woman, as a wife and as a public figure.

Her biography titled Rekha: The Untold Story written by Yaseer Usman and published by Juggernaut narrates incidents from Rekha’s life that are quite a shocker.

At the tender age of 15, Rekha was forced into a lip-lock by her co-star, Biswajeet Chatterjee and the director, Raja Nawathe while shooting a romantic scene in the movie, Anjana Safar.

The book further reveals an unexpected truth about her life: Rekha had got married to Vinod Mehra (they later got divorced) whose mother had refused to accept her as the daughter-in-law and even attempted assaulting Rekha with her footwear.

Rekha’s tryst with controversies did not end here. She is still remembered as the woman who grabbed eyeballs from the then Bollywood biggies and the paparazzi present at Rishi Kapoor-Neetu Singh’s wedding where she entered in a white sari, big red bindi and substantial amount of sindoor on her hair parting. If reports are to be believed, Rekha had even made an attempt at conversing with Amitabh Bachchan at the event where the latter’s wife, Jaya Bhaduri Bachchan and his family were present as well. The sindoor had later been explained by Rekha herself in an interview where she said that the sindoor and mangalsutra were part of the costume she was wearing for a film rehearsal from where she directly turned up for the wedding.

Another sensational event of Rekha’s life has been covered in her biography: the real reason behind the much-talked about suicide of Rekha’s husband, Mukesh Agarwal. The latter was a patient of chronic depression that was hereditary in his family and could not bear the stress of Rekha’s association with the film industry and the challenges of their divorce. He had tied  Rekha’s dupatta as a noose to the ceiling fan and died by hanging himself. This incident marred Rekha’s personal happiness and peace along with her professional standing. Co-stars, filmmakers and even her fans didn’t come to her rescue when she was reportedly being termed a “vamp” who could not be offered acting roles or even accepted as a daughter-in-law in a respectable family.

Nevertheless, Rekha has invented and re-invented her film career time and again. Her fashion sense, her personality, strong beliefs as a single, independent woman and her capabilities as a versatile actor who has never shied away from essaying the role of powerful characters on screen and has starred with established actors of her time like Dev Anand, Randhir Kapoor, Amitabh Bachchan, Jeetendra among others has re-engineered her stronghold in Bollywood more than ever.

Controversy’s favourite child, Rekha has been linked with Sanjay Dutt and for a long, long time with Bollywood’s original angry young man, Amitabh. The veteran actress, known for her proverbial roles in Khoon Bhari Maang, Khiladiyon Ka Khiladi and Khoobsurat and her acting career spanning four decades is still active in Bollywood, frequents award ceremonies and flaunts her own classic trademark style every now and then – be it a linen sari and sport shoes, ripped jeans with a headgear and has even taken the unconventional and bold route at film screenings and calendar launches. Award ceremonies have seen the elegant beauty in a new light where she has even danced to popular Hindi songs. Her most recent appearance was in Sridevi’s comeback movie, MOM’s screening where she sported a smile with her once contemporary actress.

Listed as the ninth greatest Indian actresses of all times by Rediff in 2011 and as ‘Asia’s sexiest woman’ in a UK magazine 2006 edition, Rekha will always remain an enigmatic beauty (one who can don a Kanjivaram sari like a boss!) and an ageless, popular icon of glamour, scandals and larger than life attributes.