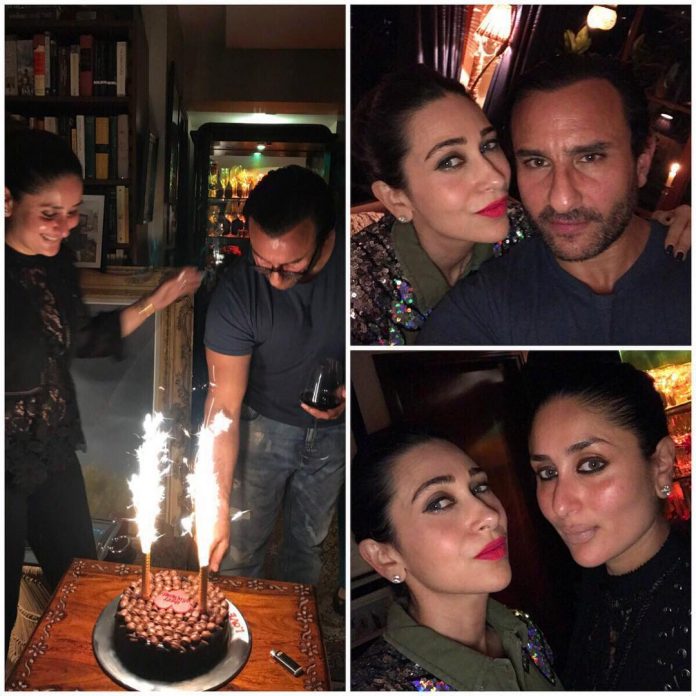 Veteran actress Karisma Kapoor turned up with rumoured beau Sandeep Toshniwal by her side. She later put up a collage of images from the birthday party that had the birthday boy cutting his birthday cake, a selfie with her and Kareena and another image of her with Saif Ali Khan.

Saif and Kareena’s son, Taimur Ali Khan was missing from the birthday photos, but maybe it was past his bedtime and the infant was asleep.

Soha Ali Khan almost made her presence felt at Saif Ali Khan’s intimate party. The actress is currently heavily pregnant and updates fans on her progress through social media on a regular basis.

Saif Ali Khan has a lot to be thankful for. Looks like his wishes are coming true! This is the first birthday he celebrates with his baby boy, Taimur. His eldest child, daughter Sara Ali Khan whom he had with ex-wife Amrita Singh, will be making her Bollywood debut by the end of the year. And of course, he’s always got his begum, stunning actress Kareena Kapoor Khan by his side.

Bollywood Garam wishes Saif Ali Khan a happy 47th birthday with many more to come! May all the actor’s wishes come true this year!