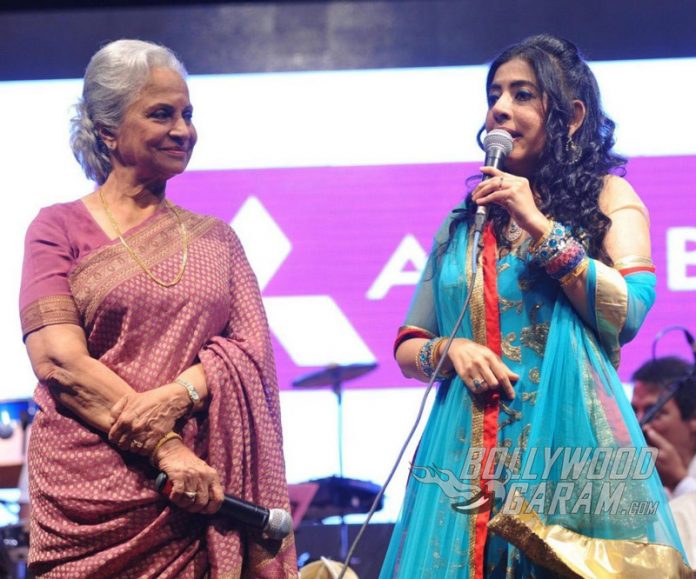 Alluded as the “most beautiful actress” by several media channels time and again, Waheeda Rehman is one veteran Bollywood actress who is also revered for her notable contribution to the Hindi Film industry and her brilliant acting chops throughout her career in 1950s, 60s and early 70s. To her credit, Waheeda owns a Filmfare Lifetime Achievement Award, two Filmfare Awards for Best Actress, a National Filmfare Award for Best Actress and Padma Bhushan.

Though Rehman appeared in Bengali, Telegu and Tamil movies as well apart from Hindi films, her Bollywood presence in the 50s and 60s primarily saw her in some of her most prominent and established roles paired opposite accomplished actors like Guru Dutt, Dev Anand, Rajesh Khanna and Manoj Kumar.

It was a financial crisis situation when her father died during her teenage years that made young Waheeda Rehman start her career in the entertainment industry with Telugu movies. It was not until 1956 when she first appeared in a Hindi cinema – CID. Her successful stint in Bollywood began there and in a span of few years she had performed leading roles in Pyaasa, Kaagaz Ke Phool, Chaudhvin Ka Chand, Sahib Bibi Aur Ghulam, Kohra, 12 O’Clock, Baat Ek Raat Ki, Bees Saal Baad, Teesri Kasam, Kala Bazar, Guide, Neel Kamal, Mujhe Jeene Do and Solva Saal. But it was Khamoshi opposite Rajesh Khanna that was the biggest hit of them all.

Discovered and brought to Mumbai by Guru Dutt, Rehman’s last movie with Dutt after 3 movies with him in the lead and one under his production was Sahib Bibi Aur Ghulam. While Dutt died soon after in 1964, Rehman went on to establish her career starring alongside Dev Anand in five hits from 1956-1965, her most noteworthy presence being in Guide in 1965. She continued to work with established actors like Kishore Kumar in Girl Friend, Dilip Kumar in Ram Aur Shyam, Aadmi and Dil Diyaa Dard Liyaa—all of them turned out to be hits. There were some critically acclaimed films too with Rajendra Kumar and hits like Teesri Kasam that she pulled off with Raj Kapoor. She even acted with actors who were junior to her by experience, the likes of Dharmendra, however the films did not do well at the box office.

Rehman even began experimenting with her roles and movies in the early 1970s with Reshma Aur Shera opposite Sunil Dutt with whom she had delivered hits in 60s. However, her experimentation in this movie and later in Phagun as Jaya Bhaduri Bachchan’s mother failed as she started being offered older roles of a mother to actors.

Rehman has also shown her comic and romantic side with Shammi Kapoor in Naseeb and later acted with Amitabh Bachchan in Coolie, Allah Rakha, Kabhi Kabhie, Trishul, Namak Halaal and as Vinod Khanna’s mother in Chandni. Namkeen, Mashal and Jwalamukhi were other notable movies by the gifted actress.

Rehman retired from Bollywood few years after her marriage to Sashi Rekhi (popularly known as Kamaljit on screen) in 1974 and her last Bollywood appearance was in early 90s in Lamhe as Anil Kapoor’s mother.

However, in 2006, she was seen in a key role as an Army man’s (R. Madhavan) mother and wife in Rang De Basanti, a major hit with Aamir Khan, Sharman Joshi, Siddharth and other actors playing important roles.

Mother to son Sohail and daughter Kashvi, the graceful beauty who is also trained in classical Indian dance, Bharatnatyam, Rehman has lived an accomplished life both in the personal and professional sphere.