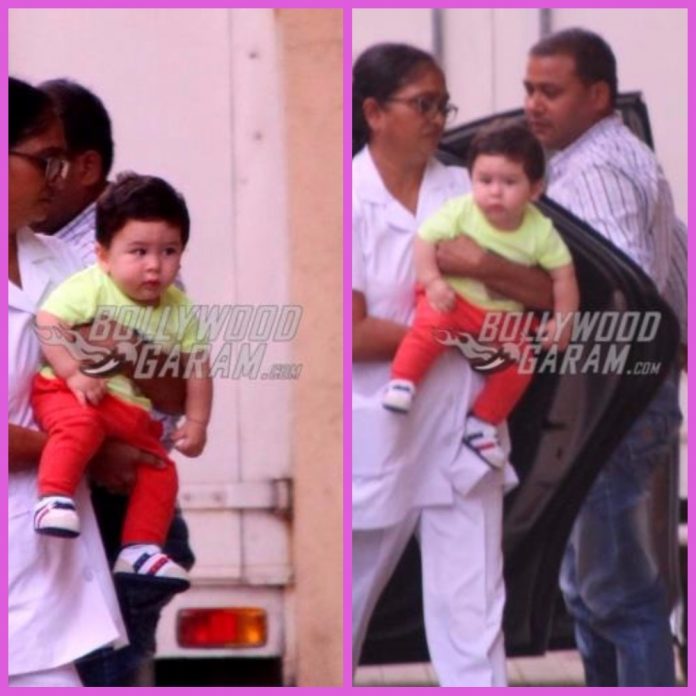 Saif Ali Khan and Kareena Kapoor’s son Taimur Ali Khan must have by now got used to the attention from the paparazzi. The little royal baby was photographed outside Kareena’s best friend Amrita Arora in Mumbai on August 16, 2017.

Taimur was photographed while he was being carried by his nanny and looked adorable in a green t-shirt and red pants. The little Khan surely has a charm as he attracts every time he is photographed by the cameras at various occasions. Saif along with Kareena and Taimur had been to a luxury holiday at Gstaad in Switzerland. The family had shared some adorable pictures from their holiday and they looked gorgeous while having fun at the picturesque location.

Kareena in an interview spoke about son Taimur and said, “Taimur is going to grow up with a working mom. My sister, his masi is also a working woman. He has my mother to look up to, my mother-in-law who is still working woman. So, he is going to grow up in that atmosphere and learn to respect women in that sense. He also has a wonderful nanny, again another working woman who looks after him so he will be growing up seeing the power of women from as early as seven months old.”

The Jab We Met actress also shared how her life has changed post pregnancy. Taimur was born on December 20, 2016 to Saif and Kareena. After her long maternity break, the actress will soon begin shooting for the upcoming film Veere Di Wedding. However, Kareena was never away from work and kept herself busy even during and after pregnancy in some or other work. Meanwhile Taimur continues to grab the limelight from his parents Kareena and Saif.