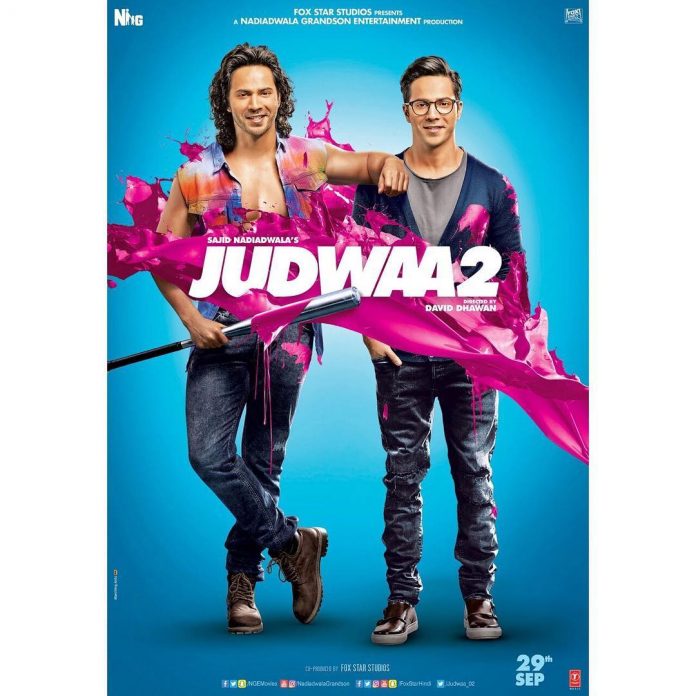 Judwaa 2 is one of the most awaited films in 2017. Lead actor Varun Dhawan unveiled the first poster of the much awaited film, a sequel to the film Judwaa released in 1997, starring Salman Khan. The sequel will have Varun playing a dual role.

The original film had Salman Kahn, Karisma Kapoor and Rambha in lead roles while the sequel has the young generation actors, Varun, Jacqueline Fernandez and Taapsee Pannu. Varun shared the new poster on his Twitter account and also revealed that the trailer of the film will be released on August 21, 2017. The Tweet had the caption, “3 days left#Judwaa2. #TrailerAug21. @Asli_Jacqueline @taapsee @NGEMovies @foxstarhindi #SajidNadiadwala #DavidDhawan.”

The poster was also shared by Jacqueline who wrote, “Dussehra is bound to be twice as fun with #Judwaa2 #TrailerAug21 @Varun_dvn @taapsee @NGEMovies @foxstarhindi #SajidNadiadwala #DavidDhawan.” The poster of the film shows Varun portray two different characters, Raja and Prem. The film is directed by David Dhawan and produced by Sajid Nadiadwala and is scheduled to be released in theatres on September 29, 2017.

Judwaa 2 also features Anupam Kher and Rajpal Yadav in supporting roles. The film is one of the most awaited films of 2017 and the audience has a lot of expectations from this film as the original one was a blockbuster.