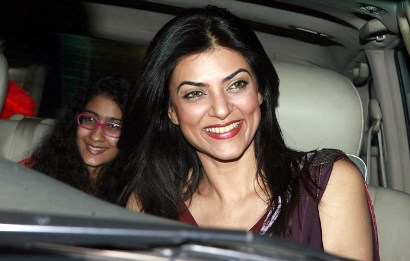 BollywoodGaram.com: Bollywood superstar Shahrukh Khan – who is enjoying the success of his recently released movie ‘Chennai Express’ – threw a lavish party for the occasion of Eid ul Fitr at his ‘Mannat’ residence on August 11, 2013 in Mumbai. The festival bash was attended by many fellow celebrities of Bollywood including Bollywood giant Amitabh Bachchan – who came in his Rolls Royce – along with his son Abhishek Bachchan and daughter-in-law Aishwarya Rai. It seemed as if the whole of Bollywood gathered at ‘Mannat’.

The bash was also thrown because of the success of the Chennai Express which also stars Deepika Padukone. Other guests at the party included veteran actor Dilip Kumar, who was accompanied by his wife Saira Bano, Reliance industries mogul Mukesh Ambani with his wife Neeta Ambani, actor Arjun Rampal and wife Mehr, Hrithik Roshan and Karan Johar.

Many stars took to their Twitter accounts and shared pictures of their moments of joy at the big party.