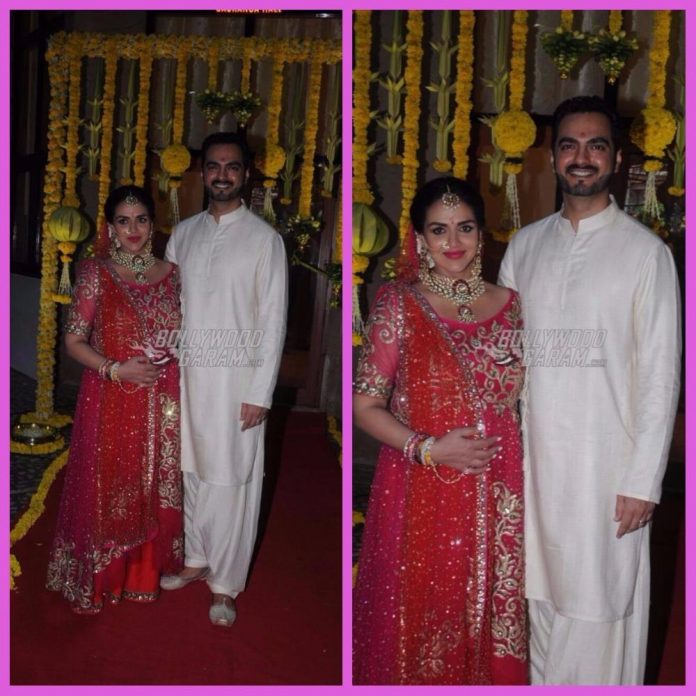 Veteran actress Hema Malini’s daughter Esha Deol, got re-married to husband Bharat Takhtani on August 24, 2017 on the day of her baby shower. The Yuva actress did not leave any stone unturned in making the day special and was seen wearing a gorgeous bridal outfit by ace designer Neeta Lulla.

The would-be parents proudly posed for the shutterbugs outside their house in Mumbai. Esha was seen clad in a pink and orange asymmetric gown with heavy kundan jewellery while Bharat was seen in a white silk kurta and pyjama. Esha’s sister Ahana, was also seen with husband Vaibhav Vohra and son Darien Vohra.

An excited Esha in an earlier interview talked about the baby shower and wedding event and said, “This time it’s a Sindhi priest who speaks Hindi too, so my in-laws will at least understand what is being said.” The Koi Mere Dil Se Pooche actress added, “As a bride, I sat on my dad’s (Dharmendra) lap and after the kanyadaan, I moved to Bharat’s lap. So, the two most important men in my life were part of the ritual. It was rather emotional.”

Bharat and Esha had first got married on June 29, 2012 in a lavish wedding ceremony held in Mumbai.