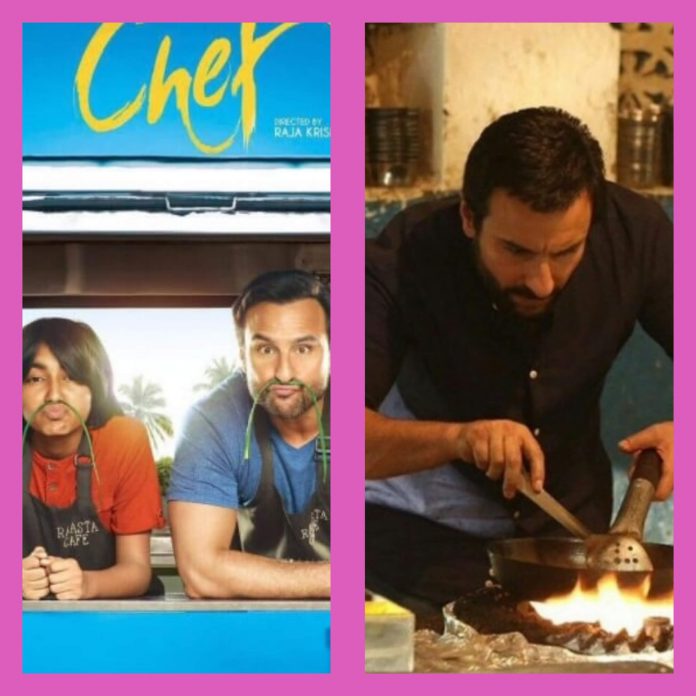 The Nawab of Bollywood, Saif Ali Khan is reportedly busy with his film projects apart from his Netflix series, Sacred Games) that are all releasing this year. One of them is the movie Chef, where the actor plays the protagonist – a chef who is trying his level best to succeed at his job while also attempting at spending quality time with his son (played by Svar Kamble) being a doting father.

A slice-of-life film, Chef makes an attempt at emphasizing on the importance of loving life and living it to the fullest as is clear from its trailer that released on August 31, 2017.

Albeit a remake of the Hollywood film by the same name where Jon Favreau (also the director of the film) played the lead and a similar storyline, Chef has its own trademark Bollywood scenes where Khan and his reel-life son in the trailer of the movie are shown gorging on Chhole Bhature and lassi. Clearly enough, the trailer panned out the story of a struggling chef at a top international restaurant who wants more from his life and yearns to spend more time with his son and it is the influence of local Indian dishes and an Indian classical dancer that makes him reach closer to his desired goal: opening his own food truck. Reportedly, Khan went through a lot of training to perfect his act that revolves around his culinary journey.

The father-son duo set out on some exciting adventures involving food and travel that not only bring them closer to each other but also helps Khan’s character, Roshan Kalra understand the relevance of living a full and happy life.

Chef’s first look was released a few hours back and it certainly showed the duo, Khan and his reel-life son in an adorable and funny light. Interestingly enough, Khan has donned the hat of a chef previously too for his movie, Salaam Namaste even though the movie did not connect food, his career and his life so intricately.

Directed by Raja Krishna Menon of Airlift fame and co-produced by Bhushan Kumar, Vikram Malhotra and Bandra West Pictures, Chef will get you a sneak-peek into what’s cooking on October 6, 2017.

Meanwhile, have a look at the trailer: