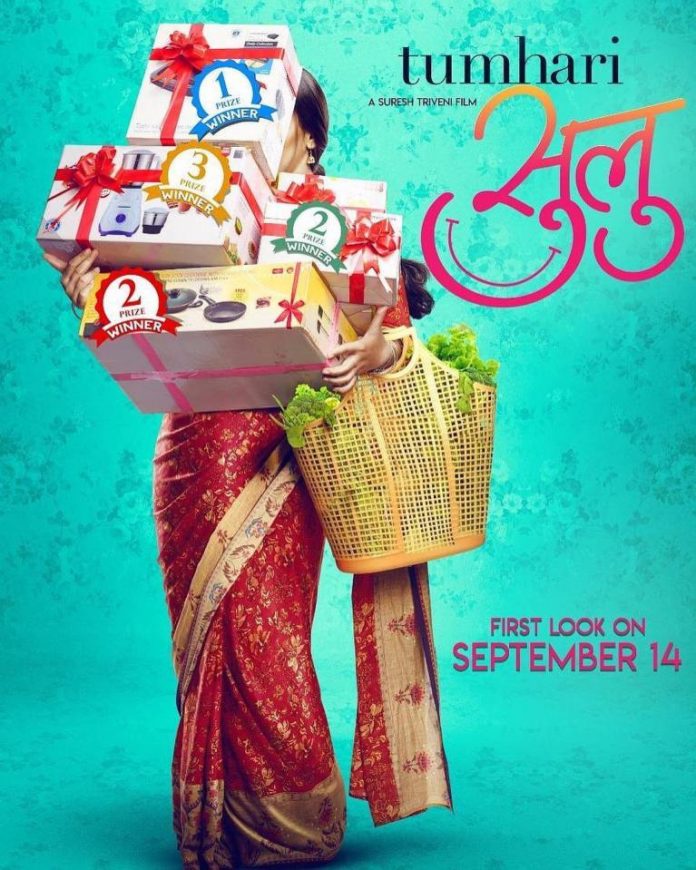 The first poster of the upcoming film, Tumhari Sulu has been unveiled. Once again Vidya Balan will be seen as a radio jockey in this film helmed by Suresh Triveni. The lead actress shared the first poster through her Instagram account.

Vidya in the poster can be seen in a red sari and hiding her face behind a heap of gift hampers and a bag full of vegetables. The film also features Neha Dhupia and Manav Kaul playing important roles. Director Suresh in an earlier interview talked about the film and said, “Middle-class housewives have been portrayed as hassled and troubled in Hindi films, but I’m a huge Hrishikesh Mukherjee fan and he showed that even middle-class families can be happy. I want the audience to walk out with a big smile on their face.”

In this generation of recreating old songs, Vidya Balan will be seen in a revised version of the blockbuster track, Hawa Hawai. The original song from Mr. India featured the legendary actress Sridevi. The director in an interview with a leading daily also stated that music plays an important role in the film as it is set in the world of radio. He further added that the song Hawa Hawai is not just a promotional track but appears at an important point in the story.

See pics from when Tumhari Sulu team called it a wrap

The story of the film shows the fun side of the youth and families and Vidya will be seen playing a very enthusiastic, happy-go-lucky and beautiful housewife from Mumbai whose life changes when she unexpectedly gets a job of a night radio jockey at a leading radio station. Vidya was last seen in the film Begum Jaan, in which she played the role of a prostitute. It will be interesting for the audience to once again see Vidya playing a radio jockey after the film, Lage Raho Munna Bhai. Tumhari Sulu will be released in theatres on December 1, 2017.