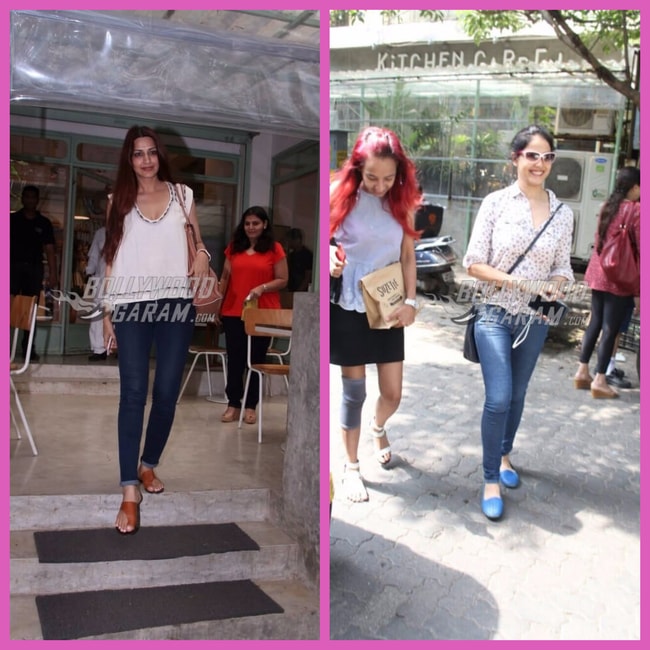 Kitchen Garden restaurant in Mumbai that offers nutritional meals and bakes their own bread is famed among Bollywood celebs – Sonali Bendre and Genelia Deshmukh were the latest to be spotted there.

This weekend saw Bollywood celebs spending some good old leisure time in their own ways. While some were busy travelling for their schedules, others were spotted enjoying their time with good food at a popular restaurant in Bandra, Mumbai – the Kitchen Garden.

While Sonali Bendre who recently conducted her second masterclass with renowned author Amish Tripathi on her Facebook book club was spotted on September 8, 2017 in a plain white top and blue denims with a brown bag outside the Kitchen Garden; Genelia Deshmukh looked quite happy wearing a printed top with blue jeans and blue footwear and carrying a black sling bag a day later.  Deshmukh’s light-pink framed glares that were in sync with her outfit made her look even more pepped up for her time out at the restaurant. She posed for the shutterbugs and showed her happy face to the cameras.

Bendre’s book club has been slowly but steadily rising up to being quite a favourite among bibliophiles and aspiring writers (with more than 2300 members already) who can learn a thing or two about different writing styles, research facts and experiences of well-known authors like Anand Neelkantan and Amish Tripathi who have been a part of Bendre’s social media masterclass and shared their challenges and writing experiences as well as discussed their present works to give a glimpse into what the readers can expect next from them.

She was recently quoted by Mid-Day saying, “Reading is a discipline, and I was losing [my grip] over it. You think there is no time. Starting the club meant I would have to read a whole book, so that I could discuss it with the members. It was the perfect way to revive a habit.”

Deshmukh, who celebrated her 30th birthday a month back on August 4, 2017, was spotted outside Mount Mary Church in casuals last week and is enjoying her motherhood currently, being a mother to two sons, Riaan and Rahyl. She was last seen in Force 2 in 2016 and her jodi with actor husband Riteish Deshmukh is tagged as one of the most charming and adorable couples of Bollywood.