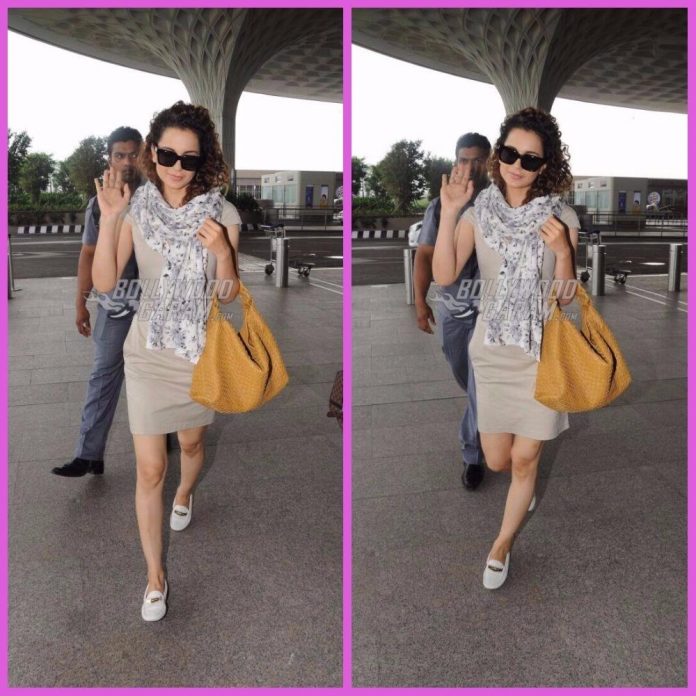 Kangana Ranaut does not seem to be bothered by the controversies in her life and career at present as she confidently makes her way at Mumbai airport.

Despite all the controversies surrounding Kangana Ranaut, the actress continues on her professional front and is leaving no stone unturned in promoting her upcoming film Simran. The Queen actress was snapped at the airport in Mumbai in the morning on September 12, 2017.

Kangana kept her look fashionable in a grey outfit with a floral scarf and white loafers. The actress acknowledged the paparazzi at the airport. Kangana, in the recent times, has been in the news for some of the controversial statements that she made against Hrithik Roshan, Karan Johar and Aditya Pancholi. The Tanu Weds Manu actress reportedly got candid about her journey in Bollywood in a recent interview and said, “I have acted upon my fears when I was struggling and trying to discover myself, who I am. But now I feel extremely satisfied with my discovery about myself, my inherent nature, about who I am as a woman and what my tendencies and capabilities are. I left home with none of the knowledge when I was 15 but at the age of 30, I know a lot about me.”

However, the actress has not allowed all these controversies to affect the promotional events and continues to be busy with her upcoming film Simran directed by Hansal Mehta. Kangana will be seen playing the role of a Gujarati girl, who is divorced, living in the US  as a hotel housekeeper and is a kleptomaniac. The film also stars Soham Shah and Mark Justice and is ready to be released in theatres on September 15, 2017.

Exclusive photos of Kangana Ranaut at the airport!