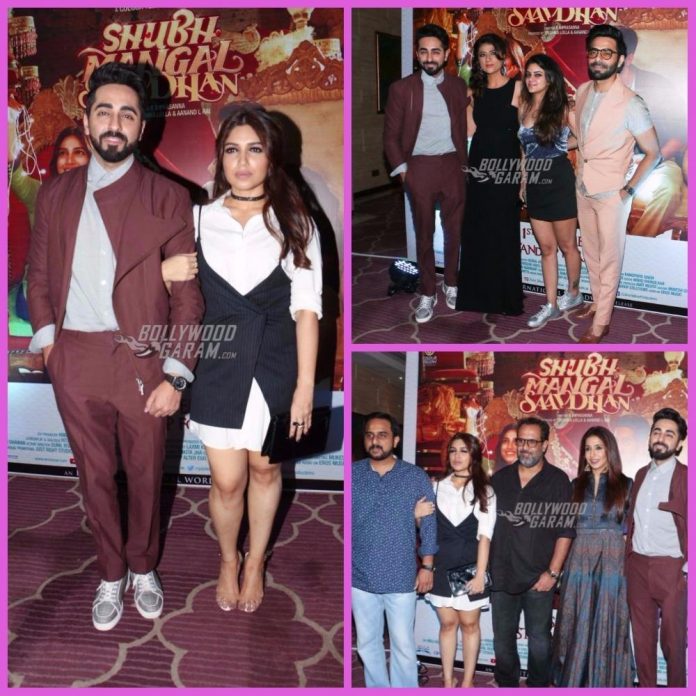 Cast and crew of Shubh Mangal Saavdhan celebrated the success of the film at a grand event in Mumbai on September 12, 2017. The film released in theatres on September 1, 2017 and got a good opening, resulting in a good business at the box office. The success party saw the presence of the lead actors, Ayushmann Khurrana and Bhumi Pednekar, Jimmy Shergill who plays a pivotal role, producer Anand L. Rai, Ayushman’s brother Aparshakti Khurrana and others.

The event also saw the presence of Ayushmann’s wife Tahira Kashyap. Ayushmann appeared in a stylish outfit with a maroon jacket with matching pants and a grey shirt while Bhumi was seen in a black and white outfit. The lead actors were all smiles and poses in front of the shutterbugs.

The film has a unique plot and is a story about two youngsters who are engaged. Mudit and Sugandha played by Ayushmann and Bhumi madly fall in love with each other as they get engaged. However, Mudit, during the courtship period realizes that he suffers from the problem of erectile dysfunction. The story is how the lead actor deals with the problem and how his family and friends play a role in solving his problem.