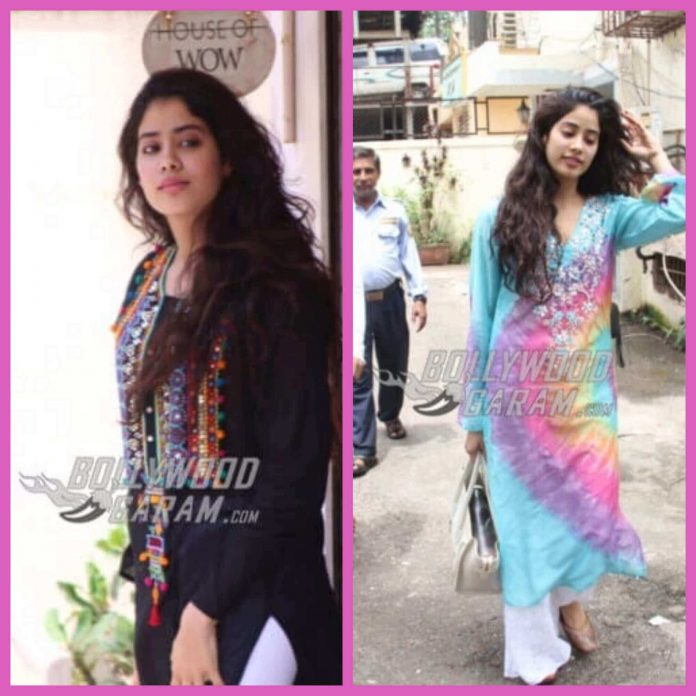 A fashionista who resembles her mother Sridevi in her looks, Jhanvi Kapoor has been spotted busy with her dance rehearsal schedules in recent times and has been quite frequently snapped outside a dance studio in Mumbai. Jhanvi who will soon star in her Bollywood debut was snapped coming out of a dance studio in Bandra on September 14, 2017 in an ethnic printed black kurta with beautiful patchwork and white leggings paired with traditional mojris and carrying a big white bag to match the look.

The star kid smiled for the cameras as she headed out of the rehearsal hall.  Her fashion sense and charming smile always seem to be on point whenever she is snapped at events, parties and outings.

Jhanvi seems to be prepping up for her debut film and her Bollywood career ahead as she will reportedly be seen opposite Ishaan Khatter in Marathi hit film, Sairat’s Hindi remake by filmmaker Karan Johar and will soon start filming for the upcoming movie. Shahid Kapoor’s brother, Ishaan’s debut, on the other hand, would be in Iranian filmmaker, Majid Majidi’s upcoming film, Beyond the Clouds. Ishaan and Jhanvi have been spotted at lunches and movie screenings together quite a few times in the recent months ahead of their big Bollywood release.

With her active presence on her social media accounts and numerous followers, Jhanvi has already made it big before she even stepped in Bollywood and being a fresh face, she has quite a lot of fan clubs and followers. Oft spotted at the gym or the dance studio, Jhanvi is believed to be grooming herself for the role in Sairat. Jhanvi, who has been making appearances in traditional Indian attires for quite a while now, was seen outside the same rehearsal hall even on September 12, 2017. She was snapped wearing a vibrant blue and pink kurta with tinges of yellow along with white palazzos and a white bag as she made her way towards her car.

Along with other soon-to-be debutantes like Saif Ali Khan and Amrita Singh’s daughter, Sara Ali Khan, audiences have amped-up expectations from Jhanvi too especially with her charismatic smile, seamless styling and simple elegance that she brings on board. Her acting chops are yet to be put to test, however. It is clear though that Jhanvi has a seemingly assuring and promising future in B-town.