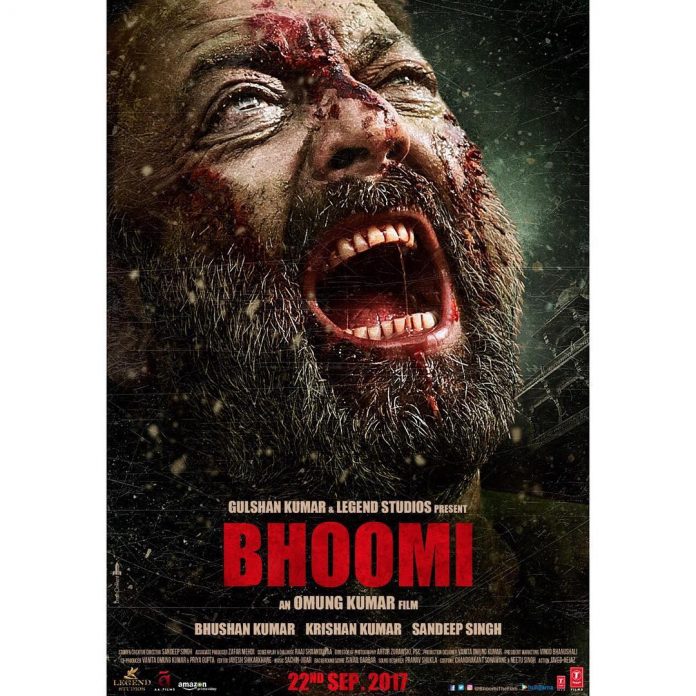 Bhoomi’s new poster is even more intriguing and full of strong expressions of anguish, pain and revenge.

Makers of Bhoomi unveiled a new intriguing poster of the film. The new poster featuring Sanjay Dutt has been shared on his social network. Bhoomi‘s new poster shows a blood-clad Sanjay’s close-up shot while he is seen screaming in agony.

The story of the upcoming film will see Sanjay play the role of a father who avenges all the wrong-doings done to his daughter. Sanjay Dutt released the trailer of the film on daughter Trishala’s birthday on August 10, 2017. Trishala had sent an audio note for father Sanjay during the trailer launch which was played at the launch event: “My dearest Papa Dukes, it’s so nice to know that you have chosen to launch the trailer of Bhoomi on my birthday and it’s a surprise. It gives so much happiness that you have chosen a film on the father-daughter relationship as your comeback film. I am really proud of you Dad and you are stronger than you know. I am really blessed to be a part of you. Love you forever.”

Bhoomi will mark the return of Dutt to the silver screens after he was released from the jail. The film also stars Aditi Rao Hydari and is directed by Omung Kumar. The trailer of the film has left the audience curious and wanting for more. Bhoomi is ready to be released in theatres on September 22, 2017.