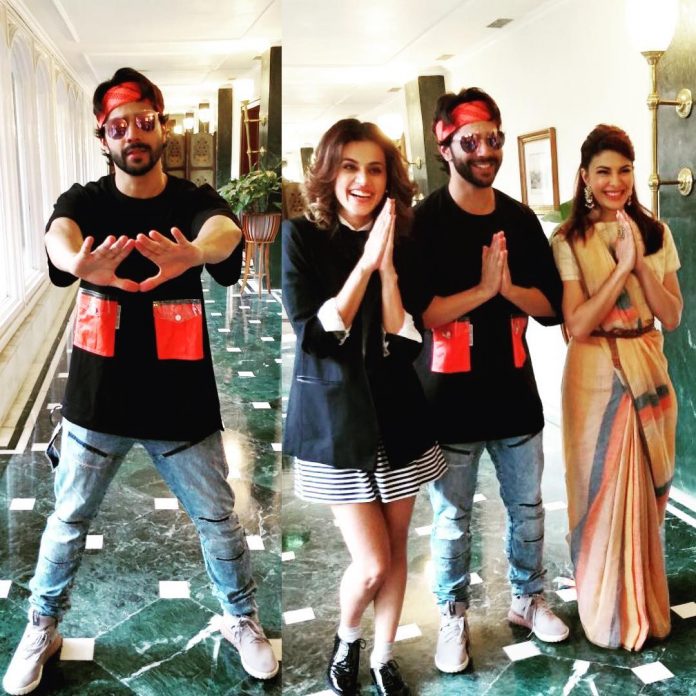 Judwaa 2 lead actors have been actively promoting the film in an elevator, at a radio station, in a TV show and are now on a promotional tour to Kolkata

Team Judwaa 2 is in Kolkata for promotions and they are indeed having a blast. Varun Dhawan, Taapsee Pannu and Jacqueline Fernandez donned different avatars during the promotional event. The Badrinath Ki Dulhania actor got in to the character of Raja, Taapsee turned into a student while Jacqueline was seen as a teacher.

Varun shared a candid picture from the promotions on his Instagram account and wrote “Nameshkar Kolkata. The judwaa2 crew is here. Raja has come with one student and a teacher @jacquelinef143 @taapsee. Wearing my new #idee glasses”.

Namoshkar Kolkata. The judwaa2 crew is here. Raja has come with one student and a teacher @jacquelinef143 @taapsee. Wearing my new #idee glasses

The audience went crazy when the trailer of the film was released and the recreated versions of the songs Oonchi Hai Building and Tan Tana Tan Tan Tan Tara have already become popular among the listeners. Composer Anu Malik has recreated the 1997 chartbusters to give a new and modern touch. Apart from the recreated songs, the makers launched the song Suno Ganpati Bappa Morya during the Ganesh Festival.

The trailer launch event was special as there were 200 twins present at the venue. The twins were invited from across the country. The film will also see Salman Khan in a cameo. Judwaa 2 is ready to be released in theatres on September 29, 2017.