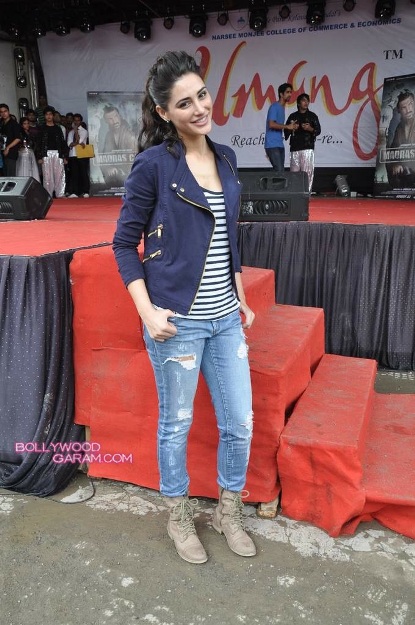 BollywoodGaram.com: It’s raining college fests in India and what a better way for Bollywood stars to reach out to a wider audience than to promote a movie at the fest!

The promotions for the upcoming movie ‘Madras Cafe’ are in full swing and actress Nargis Fakhri was at Mumbai’s NM College fest “Umang 2013” on that occasion. The actress arrived at  NM College on August 16, 2013 to promote the new movie, in which she plays the lead role opposite co-star John Abraham.

‘Madras Cafe’ will be the second Bollywood movie for the actress, after she starred in the movie ‘Rockstar’, along with Ranbir Kapoor. The movie is an Indian political espionage thriller which is directed by Shoojit Sircar. The flick has been set in the late 80’s and 90’s, during the time of the Sri Lankan civil war and the assassination of the Indian Prime Minister Rajiv Gandhi.

Nargis seemed to be enjoying the event and was even seen capturing a couple of pictures of the performances on stage. She even went on stage and danced before coming down and posing for photographs.