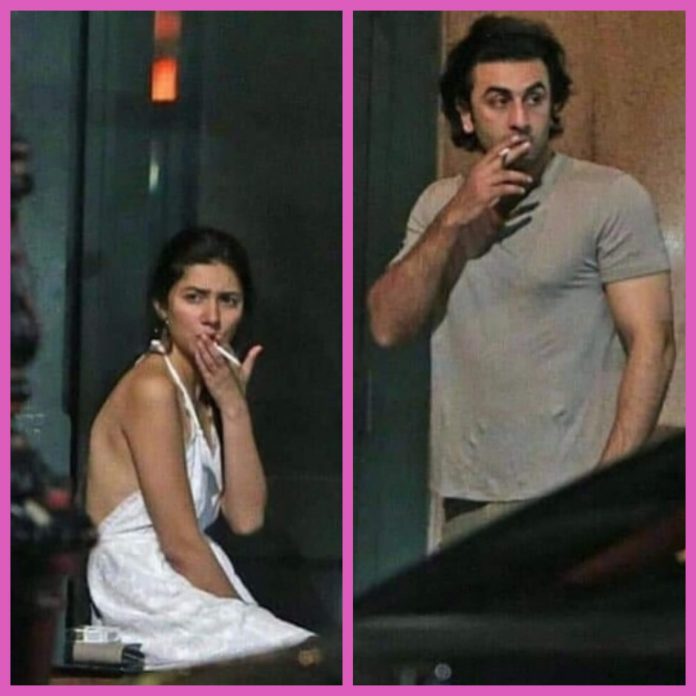 A backstage video in March 2017 showed Bollywood’s leading actor Ranbir Kapoor and Pakistani actress, Mahira Khan (who was seen in Shah Rukh Khan’s Raees) together at Dubai’s Global Teacher Prize event where Mahira and Ranbir were presumed to be having a tussle as Mahira was pleading to him. Now they have again been spotted spending some leisure time at New York smoking away. Speculations on their dating and alleged affair have been rife since their Dubai event show up and the recent NYC smoking together scenario only adds fuel to the fire.

Meanwhile, the Instagram post showing the actors chilling together right outside a hotel room in NYC has gone viral and stormed up the internet as some Twitteratis find a new way to take a dig at Mahira’s smoking and dressing and even slut-shaming her with their hate messages while some others are wondering what’s brewing between the two as they seem to be comfortable in each other’s company and have started being snapped together. Both Mahira and Ranbir seemed to enjoy their smoke time together as the Raees actress sported a backless white dress and Ranbir casually stood beside her in a grey t-shirt and green pants. Some Tweeple even spot a love bite on Mahira’s back.

Mahira Khan is so fucking overrated and annoying.

I actually feel sorry for her. She looks lost & misguided. And no one will let her live this one down.Fallen from grace & hard? #MahiraKhan pic.twitter.com/7cfEdJ8bRF

mahira khan totally ruined her decent image with this. so disappointed.

Is this for real? @TheMahiraKhan & Ranbir Kapoor smoking and someone noticed a love bit on her back. pic.twitter.com/DEHjnVhKhZ

Anticipating a book coming out soon: “The Rise and Fall of Mahira Khan”. #MahiraKhan ?

The 32-year old actress and the Rockstar actor are seen having a deep conversation and their ‘close friendship’ has been quite the talk of the town off late. Ranbir broke up with his long-time girlfriend, Katrina Kaif only last year and on the work front, will be soon seen in the yet untitled Sanjay Dutt biopic helmed by Rajkumar Hirani. Even in the Instagram post with Mahira, he is seen exhibiting the beefed up look he has been working out for, that he will be donning in the upcoming movie.

Mahira, meanwhile, had been in news when she was not able to promote Raees because of the tension that was ripe between the two countries last year especially as Pakistani artistes were sent back and were banned from working in Bollywood at the time.

Hotness alter !! #MahiraKhan with #RanbirKapoor caught and snapped on the street of New York !! Love is in the air !!

The actors have however maintained their ‘just friends’ and ‘still single’ statuses in media glare. However, the grapevine is abuzz again with dating rumours between the couple that shares this camaraderie and as their pictures together go viral, their fans eagerly await for a response from the actors and a movie capturing their off-screen chemistry and bringing it on screen.