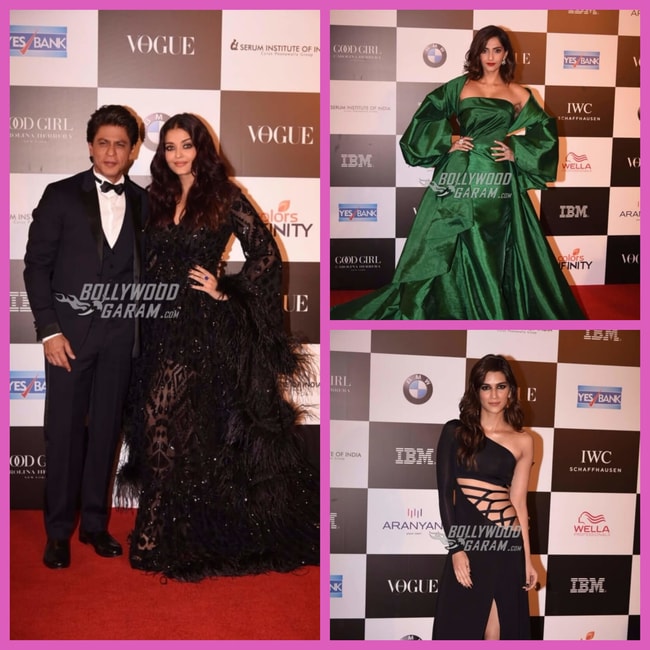 Sunday, September 24, 2017 night witnessed a grand event and awards night for Bollywood stars. The star-studded evening was organized for felicitating women in Bollywood with Vogue Women of the Year awards 2017 marking a celebration of a successful decade of the Vogue India.

As Vogue reports, “To celebrate the milestone moment, we brought together some of the country’s most influential men and women at the very first edition of the Vogue Women of the Year awards,” the Grand Hyatt Hotel in Mumbai was packed with stars in their best stylish ensembles.

Aishwarya Rai Bachchan, Shah Rukh Khan, Anushka Sharma, Sonam Kapoor, Anil Kapoor, Nita Ambani, Shweta Bachchan Nanda, Arjun Kapoor, Karan Johar, Shah Rukh’s wife and interior designer Gauri Khan and Aamir Khan’s wife and filmmaker, Kiran Rao among others graced the event. While Aishwarya who looked spectacular in a long embellished black gown with feathered sleeves and took home the trophy for Vogue Influencer of the Decade, she was joined on the stage by Shah Rukh who earned the Vogue Entertainer of the Decade Award. Shah Rukh too was dressed in a black suit with a bow tie.

Another candid moment was when Sonam Kapoor dressed in an emerald green dress by designer Fouad Sarkis won the Vogue and IWC Fashion Icon of the Year Award and received it from her father Anil Kapoor.

Veteran actress Twinkle Khanna who is known as mrsfunnybones on Twitter and has turned into an author now sizzled in a beautiful red dress and bagged the Vogue Opinion Maker of the Year Award. Meanwhile, Anushka Sharma stunned all in her gorgeous silver embellished ensemble by Falguni Shane Peacock India and was proudly felicitated with the Vogue and BMW Game Changer of the Year Award.

Kriti Sanon, Radhika Apte, Athiya Shetty, Kiran Rao, Kanika Kapoor and Aditi Rao Hydari were some other Bollywood women celebs who looked ravishing in their outfits and were clicked posing and smiling by the paparazzi.

Karan Johar, Anil Kapoor, Manish Malhotra and Sonam Kapoor all took to their Instagram accounts to post special moments from the majestic evening. While KJo who won the Vogue Man of the Year Awardwas seen in a floral patterned monochrome suit by Tom Ford, Shweta Bachchan Nanda opted for a magnificent ivory gown with silver and gold embellishments and Gauri draped herself in a Monisha Jaising sari gown that accentuated her looks.

Meanwhile, Anil Kapoor was also seen enjoying some good moments with Arjun and Arshad Warsi. Anil and Arjun shared a warm hug together.

We shot our own VOGUE cover!!!! This ones for you @vogueindia

Thanks daddy for presenting the award to me! You inspire me everyday to be the best possible version of myself. @anilskapoor you’re the best! @vogueindia

It’s a special occasion so I took a lil extra time in getting ready today! End result is #Vogue worthy right? Celebrating Women of the Year with #Vogue tonight!! #VogueWomenOfTheYearAwards

Presenting my daughter with the award was the highlight of my night! Congratulations @sonamakapoor you deserve this & much more! Love you! pic.twitter.com/UFKp4HTqud

Glamour and glitz rounded up the night and the Vogue 10 year celebration couldn’t have been any better!

Exclusive photos from the Vogue Women of the Year Awards 2017!