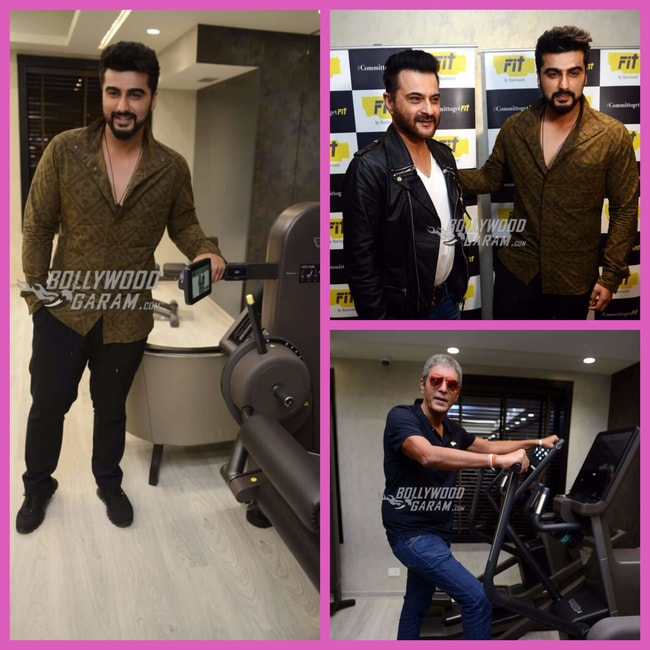 With his debut film, he struck chords with many and went on to win the Filmfare Award for Best Male Debut for his intense performance in Ishaqzaade opposite Parineeti Chopra. Since then there has been no looking back for this actor as he has hosted TV shows like Fear Factor: Khatron Ke Khiladi and even the IIFA Awards in 2015. His role in Chetan Bhagat’s book adaptation movie, 2 States earned him several accolades and over a billion dollars worldwide. Gunday, Ki and Ka and Mubarakan, all of these films starring Arjun Kapoor in the lead garnered huge figures at the box office. Arjun has now launched Ravisant gymnasium in Delhi where he looked like quiet the cool dude with a printed shirt and black trousers.

Veteran actors Sanjay Kapoor and Chunky Pandey joined him in the venture. Sanjay was snapped smiling for the cameras in a white tee, blue ripped denims and a leather jacket with cool Nike sneakers, Chunky, meanwhile, was snapped on the treadmill in a dark blue t-shirt, blue denims and blue loafers, not to forget his colorful glares.

Ranbir Kapoor’s sister, Riddhima Kapoor Sahni was spotted at the gym too with her daughter, Samara Sahni and they were all clicked by the paparazzi having fun, laughing and chatting, posing for the shutterbugs and even taking quite a few selfies themselves while at the gym. Samara looked adorable in a white printed frock and pink flats.

Arjun Kapoor was last seen in Mubarakan in a double role along with his uncle Anil Kapoor, Ileana D’Cruz, Athiya Shetty and the family entertainer did a decent business at the box office too. Arjun is already a favourite with filmmakers and some of his co-stars and industry insiders as well.

Exclusive photos of the Mubarakan actor at the gym launch in Delhi!