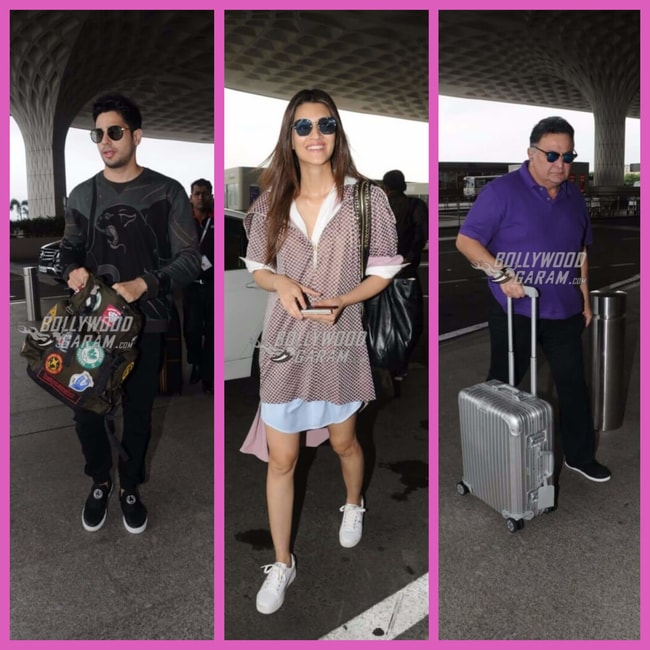 B-towners are often snapped making their way at the airport while travelling for work and leisure. It was Siddharth Malhotra, Kriti Sanon and Rishi Kapoor this time around.

It is the festive season and ace designer Manish Malhotra plays an active part in a two-day shopping exhibition event named Design One Dubai with designer outfits put together by some of the UAE and South Asia’s expert designers. Bollywood’s dashing actor, Siddharth Malhotra will be joining Manish at the exclusive event to walk the ramp for the designer. He was snapped leaving the Mumbai airport on September 29, 2017 donning a casual look with a graphic t-shirt, a pair of black denims, a backpack with funky stickers and cool sneakers.

On the work front, Malhotra was last seen in A Gentleman with Jacqueline Fernandez and will next be seen in Ittefaq that is a remake of the 1969 movie starring Rajesh Khanna, Bindu and Nanda among others. Malhotra will reportedly be paired with Sonakshi Sinha in this one that is slated to release on November 3, 2017.

Kriti Sanon is another popular B-town actress who will be walking the ramp for the celebrated designer and shared her excitement of being a part of the shopping extravaganza during this weekend that is, September 30, 2017 to October 1, 2017.

Gonna be walking for my favorite @manishmalhotra05 In Dubai tomorrow! ❤️????Cant wait!!

She was snapped at the airport too and was seen wearing a casual printed dress with trendy, uniquely-shaped sunglasses and her hair left open. She teamed up the dress with white sneakers for an uber-cool casual chic look. Kriti was last seen in Bareilly Ki Barfi with Ayushmann Khurana and Rajkummar Rao.

Rishi Kapoor was also on his travel schedule and made his way at the airport wearing a bright purple t-shirt, black denims, sneakers and reflective glares. His upcoming film, 102 Not Out where he plays the 75-year-old son of Amitabh Bachchan is slated for release on December 1, 2017 alongside another awaited film of the year, Padmavati starring Deepika Padukone as Rani Padmavati, Shahid Kapoor as Raja Rawal Ratan Singh and Ranveer Singh as Alauddin Khilji in a magnum opus helmed by Sanjay Leela Bhansali.

Exclusive photos of Siddharth, Kriti and Rishi Kapoor at the airport!