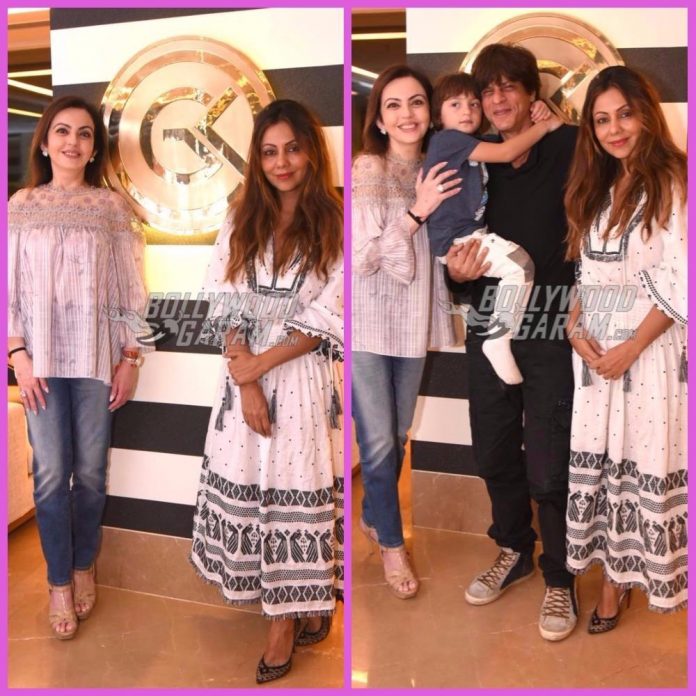 Gauri Khan’s store, Gauri Khan designs is often visited by celebrities from Bollywood. This time chairperson and founder of Reliance Industries, Nita Ambani visited the store on October 2, 2017. The store not just had Gauri but also Shah Rukh Khan and their little munchkin AbRam.

Nita looked pretty in a cool top and a pair of denims and was all smiles with the producer  Gauri who looked great in a white outfit. Little AbRam, meanwhile, looked adorable in a cool t-shirt and white pants and was seen snuggled up with father Shah Rukh. Gauri thanked Nita Ambani through her Twitter account and wrote, “Thank you for spending the evening at #gaurikhandesigns . Was a pleasure having u over at the store …”

The store has earlier been visited by Sanjay Leela Bhansali, Kajol, Arjun Kapoor, Ranbir Kapoor, Malaika Arora, Karan Johar and Sridevi. Everyone who has visited Gauri’s store were all praises for her style and grace which reflected in her store. The Producer-turned- entrepreneur has earlier designed Ranbir Kapoor’s bachelor pad and a nursery for Karan Johar’s twins.