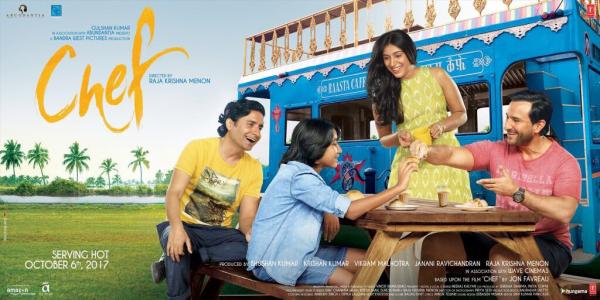 While Saif Ali Khan is travelling places to promote his upcoming film Chef, the makers have released a new poster of the film. The new poster shows a family enjoying a meal together outside a food truck. The film has lead actors Saif Ali Khan, Padmapriya Janakiraman, Svar Kamble and Dhanish Karthik.

Chef is the Bollywood adaptation of the Hollywood film with the same name and is ready to be released in theatres on October 6, 2017. The film is directed by Raja Krishna Menon and jointly produced by Krishan Kumar, Bhushan Kumar, Raja Krishna Menon, Vikram Malhotra and Janani Ravichandran.

The trailer of the film has already managed to grab the attention of the audience. The plot shows how food plays a vital role to untangle a relation between a father and son. Saif will be seen playing the role of a father who quits his job to spend time with his son and the two then come up with a concept of food truck.

The actor in an earlier interview with a leading daily said, “I’m truly excited about Chef, I’ve enjoyed every moment shooting for it. Raja has adapted the story beautifully for the Indian palate, underlining a relationship between a father and son.” The film also stars Chandan Roy Sanyal, Neha Saxena and Kareena Kapoor Khan in a cameo.