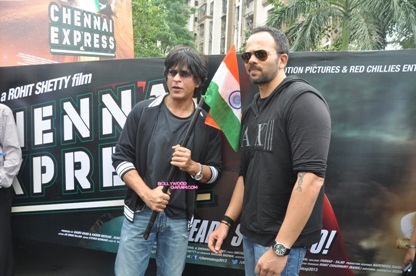 BollywoodGaram.com: Rohit Shetty’s ‘Chennai Express’ is continuing to break records. After it achieved major success in India and overseas, the movie reportedly broke box office collection records in neighboring Pakistan as well. The Shahrukh Khan and Deepika Padukone starrer movie has grossed Rs. 40 million and broke records in Karachi – which is the biggest city in Pakistan – after it was released on August 9, 2013.

Mohammad Qadri, the media spokesperson for IMGC said, “There is no doubt that ‘Chennai Express’ has become the biggest box office hit from India since the government allowed screening of Indian movies in the country”. IMGC is the Pakistani biggest distribution company, with offices located in Lahore and it imports Indian films through Dubai.

Qadri stated that the movie was released in eight screens in Karachi and grossed more than 40 million rupees, while its figure is still mounting. The spokesperson went on to say that the final figure is expected to be higher once the final figures of ticket sales for all over Pakistan are available on Monday, August 19, 2013.

Earlier, the record for the highest-grossing movie from India was held by the Salman Khan starrer movie ‘Dabangg’, in Karachi. Reports said that there is a huge demand for tickets and in some places about five to six shows are being run in one day.