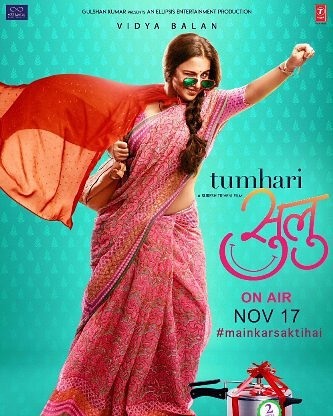 The teaser, first looks and interviews on Tumhari Sulu have created quite a stir since they arrived

The trailer of the upcoming film Tumhari Sulu managed to make the audience even more curious. The makers had earlier scheduled to release the film on December 1, 2017. But the film release has been postponed to November 17, 2017 so as to avoid a clash with the Sanjay Leela Bhansali-helmed Padmavati.

Tumhari Sulu is a comedy drama which has Vidya Balan in the lead where she will be seen playing the role of a married middle-class woman from Mumbai, who gets an opportunity to turn in to a night radio jockey. The film also stars Neha Dhupia and Manav Kaul and is directed by Suresh Triveni.

Suresh in an earlier interview with a leading daily had said, “Middle-class housewives have been portrayed as hassled and troubled in Hindi films, but I’m a huge Hrishikesh Mukherjee fan and he showed that even middle-class families can be happy. I want the audience to walk out with a big smile on their face.”

The makers have also recreated the song Hawa Hawai from the blockbuster film Mr. India. The director also said that music plays an important role in the film as it is all set in the world of radio. Vidya was last seen in the film Begum Jaan and it will be a good change for the audience to see the actress playing the role of a middle-class married woman.