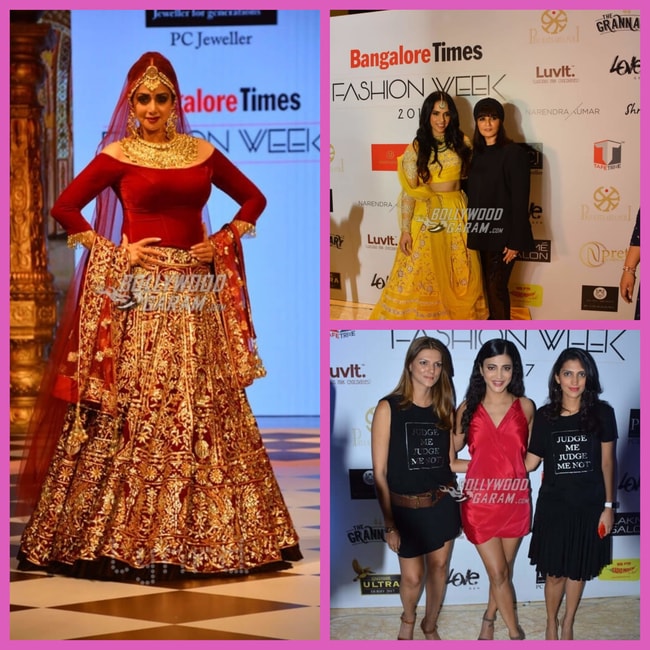 Sridevi has completed 300 Bollywood films and even at 54, looks stunning walking the ramp and gracing a fashion event

Bengaluru’s two-day fashion event, Bangalore Fashion Week 2017 at JW Marriott was an extravagant and lavish show with top designers of the country taking it as an opportunity to showcase their exquisite collections while there were models, actresses and other popular celebrities at the event too who looked fabulous in the designer wear that they walked the ramp in.

However, it was Sridevi who stole the show and looked ravishing in a red and gold bridal wear lehenga paired with a boat-neck and off-shoulder red choli, fancy  net dupatta with accessories – designed by Nupur Vasdev, complete with heavy embellished gold jewellery by PC Jewellers that included a matha patti, danglers and a big neckpiece. The red dupatta was worn over her head and tied with the matha patti, showcasing an entire rajasthani traditional bridal wear outfit.

The Mom actress managed to grab eyeballs in her breathtaking appearance while endorsing the bridal jewellery and couture collection ahead of the wedding season this year. She looked every bit of a royal personality in the Rajputani attire and her appearance at the fashion show couldn’t have been any grander and regal as she turned out to be quite the showstopper on Saturday, October 7, 2017 with designer Nupur Vasdev.

The ace actress has last been seen in an emotionally-moving thriller, Mom that marked her 300th outing in Bollywood. Just before appearing in the fashion event, she took to Twitter to express her excitement and joy at the opportunity:

“Walking the ramp is always special. Really excited to be the showstopper for the PC Jeweller show at Bangalore Times Fashion Week.”

Saina Nehwal who walked the ramp for Neeta Lulla and turned out to be the showstopper on Day 2 that is October 8, 2017 at the fashion event looked surprisingly radiant and ethereal in a bright yellow lehenga choli with silver embellishments, teamed up with a matching maang tika and a neckpiece.

A leading news agency further quoted Neeta ahead of the event saying, “I am proud to present my latest collection for which Saina Nehwal is the perfect muse. My collection is the effortless amalgamation of two traditions just the way fashion and sports creates a separate world of its own, I am also excited to launch my pret line called ‘N Pret’ for the very first time in the public gamut with Bangalore Times Fashion Week, which serves as the perfect platform to launch the latest bridal trends with the festive season upon us.”