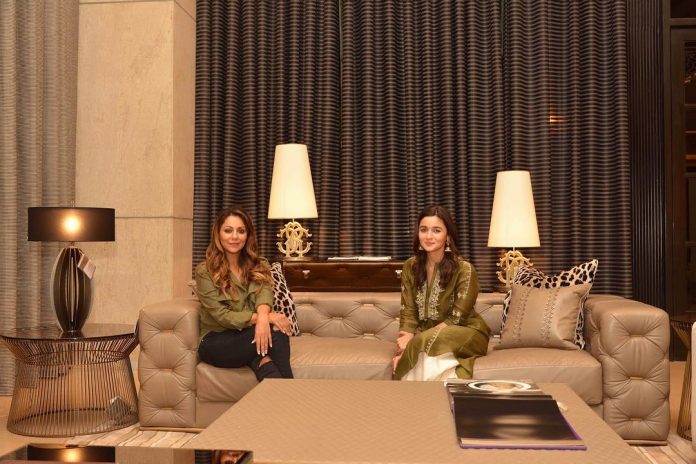 Gauri Khan is a popular interior designer among the film fraternity and is the favourite of many. Her design store often has visitors from Bollywood. After Nita Ambani, the latest to visit the store was Alia Bhatt on October 11, 2017.

Alia posted a few pictures of her visit to the store on her Instagram account and captioned it as, “Beautiful evenings spent at the all new and fabulous #GKD store! You’ve done such a stunning job with the place @gaurikhan!”. The Udta Punjab actress looked pretty in an olive green kurta with white wide-legged pants. On the other hand Gauri kept her look casual in a green shirt and black ripped pants.

Celebrities like Ranbir Kapoor, Rani Mukherji, Sridevi, Kajol, Arjun Kapoor, Karan Johar, Karisma Kapoor and Nita Ambani have earlier visited the store. Gauri Khan too shared a picture with Alia Bhatt on her Instagram account and wrote, “What’s new at #GKD ? We are with the sparkling & scintillating @aliaabhatt what a pleasure… Positive vibes all the way!!!”

Alia is currently working on the upcoming film Raazi and has also signed another project Brahmastra which will also star Ranbir Kapoor and Amitabh Bachchan. The film will be directed by Ayan Mukherji and is due to be released in August 2019.

Beautiful evenings spent at the all new and fabulous #GKD store! You've done such a stunning job with the place @gaurikhan ! ??