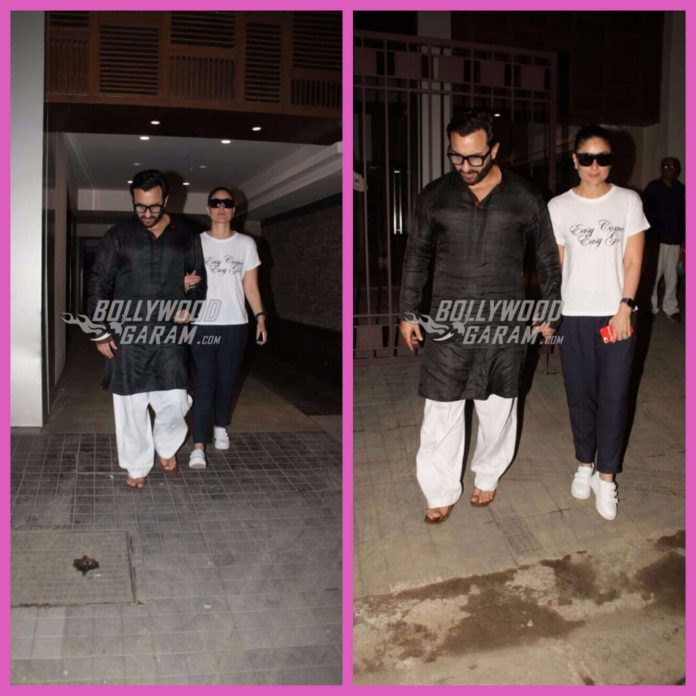 Saif Ali Khan and Kareena Kapoor Khan had got married on October 16, 2012

Saifeena also became parents to Taimur Ali Khan in December last year and while Taimur was MIA, the couple was snapped together while leaving for Soha’s residence in casual avatars  – while bespectacled Saif opted for an ethnic salwaar kurta, Kareena looked sporty in  a plain simple white tee, blue track pants and white sneakers.

Kareena was spotted this weekend at the airport when returning from Delhi after completing her first schedule of shoot for Veere Di Wedding that is deemed as her comeback film after her maternal break. The film will also star Sonam Kapoor, Swara Bhaskar in the lead roles and is being jointly produced by Rhea Kapoor, Nikhil Dwivedi and Ekta Kapoor when being helmed by Shashanka Ghosh. The story of the chick-flick has been written by Nidhi Mehr and Mehul Suri.

Saif, meanwhile, had his last Bollywood outing with Chef that released on October 6, 2017 but could not do more than an average business at the box office. The two had got married in 2012 in a private ceremony amidst friends and family and had reportedly dated for five years before that. Their love story began on the sets of the film, Tashan and the two have been quite in Tashan (style) since then. Saif went ahead and got Kareena’s name tattooed on his hand. They admitted to the public about their relationship in 2008 after Jab We Met’s release and have been since termed Saifeena. Kareena reportedly agreed to marry Saif as he agreed to support her work and career even after marriage.

Further, Kareena’s pregnancy phase marked fashion goals and work goals for to-be-mums the world over as the stylish diva of Bollywood did not give up on acting or her health after marriage or during pregnancy. Her marriage to Saif has been one of the most talked about within the film industry and outside it as well, especially as it challenges religious differences among other stereotypes like female actresses not working after marriage. Both have embraced parenthood and are at the same time, busy with their professional responsibilities.

The two are known to be Bollywood’s power couple as they often give people goals for relationships, fitness, style, vacations and more recently even parenting ones!

Exclusive photos of the couple as they celebrated their fifth anniversary!