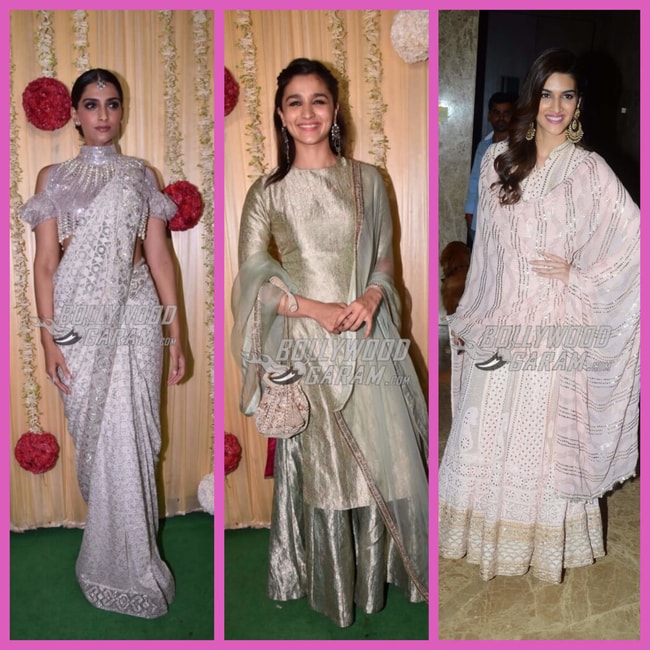 Diwali means lavish parties, lighting, delicacies, sweets and welcoming guests. As the Festival of lights is round the corner, Bollywood celebrities dress in their stylish best to be the hosts and guests at extravagant celebrations. Some even go the offbeat route and create style trends.

Here are some of the most trending outfits that are celebrity approved and are the hottest ethnic fashion trends for Diwali 2017.

A vision in white, Sonam dressed in a white concept sari designed by Abu Jani and Sandeep Khosla. The blouse is designed in a bandhgala style with casual, frilly sleeves and is heavily embellished in silver. The Neerja actress completed the look with a maang tikka along with silver studs and nude lips.

At Nita and Mukesh Ambani’s pre-diwali bash, Karisma Kapoor stunned in a one-shoulder black and white dress while Kareena Kapoor twinned with her sister in a tuxedo style black dress.

The Bareilly Ki Barfi actress has been hitting all the right spots with her style statements at each Diwali bash she attends. At Ramesh Taurani’s Diwali bash, Kriti was seen in a shimmering baby pink ethnic wear with golden danglers and a matching dupatta. While for Ekta Kapoor’s Diwali bash, Kriti adorned herself in a navy blue velvet lehenga with an off-shoulder top with embroidered and feathered sleeves.

Crop tops paired with long patterned skirts and danglers with hair tied in a bun is one trendy fashion with a mix of modern and traditional and Sophie Chaudry showed how it can be quite an awe-inspiring and offbeat Diwali wear. Even Daisy Shah wore something similar – a one-shoulder ruffled crop top in a metallic shade with bright pink and gold embellished long skirt. Kishwer Merchant too paired a metallic bronze sleeveless crop top with a pastel shade and floral patterned long skirt with matching clutch and minimal traditional jewelry.

Divyanka has been another small screen celeb who has always been big on the fashion game. While she wore a red gown to Sandiip Sikcand’s Diwali bash, the most recent Ekta Kapoor’s Diwali celebration saw her wearing an exquisite blue and golden gown with long flowy sleeves with intricate golden work. Her husband, Vivek Dahiya too stepped up the ante in men’s traditional wear with a long round neck, frilled on the sides long blue kurta with black pants and shoes at Sandiip Sikcand’s bash and a plain black satin kurta with ruffles paired with black pants and brown shoes.

Alia Bhatt wore a long round neck shimmery kurta and paired with a well-matched long skirt and a dupatta. She carried a little white pouch and completed the whole look with danglers.

With these trends and more like jacket and cigarette pants, a solid colored gown with a long patterned jacket, dhoti style kurti or dhoti style sari like the ones worn by Alia or Shilpa Shetty, there is a lot that one can achieve this Diwali. Apart from the regular salwaar-kurta or lehenga, these are some offbeat options for a fashionable Diwali. Here’s looking forward to a stylish Diwali with more such fashion statements at parties!