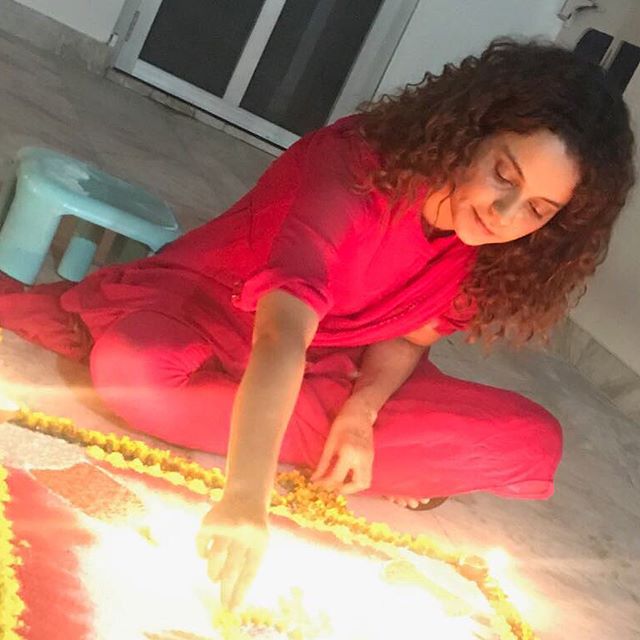 While the entire film fraternity celebrated Diwali with friends and colleagues at various high profile Diwali parties in Mumbai, actress Kangana Ranaut celebrated amidst family at her native place in Himachal. Kangana’s sister Rangoli posted a few pictures of the day spent with family on Twitter.

The Simran actress in the pictures can be seen making a Rangoli with mother Asha Ranaut. Kangana and Rangoli also posed for a sibling selfie. The sisters looked fabulous in pink traditional outfits. Rangoli Tweeted, “#childhoodmemories #parentshouse #Himachal enjoying every bit of the day !!! Happy Diwali.”

Another post read, “And some people r just busy posing for the picture #nocontribution #HappyDiwali.” Kangana in recent times was involved in the infamous controversy with Hrithik Roshan while sister Rangoli supported the Rangoon actress like a steady rock. Seems like, the actress wanted a break from all the negativity and decided to spend time with her family.

Kangana recently recovered from an injury that was caused while she was practicing sword fight. The actress is preparing for her role in the upcoming film Manikarnika – The Queen of Jhansi in which she will be seen playing the lead of Rani Laxmi Bai. Kangana was last seen in the Hansal Mehta-helmed Simran which failed to impress the audience.