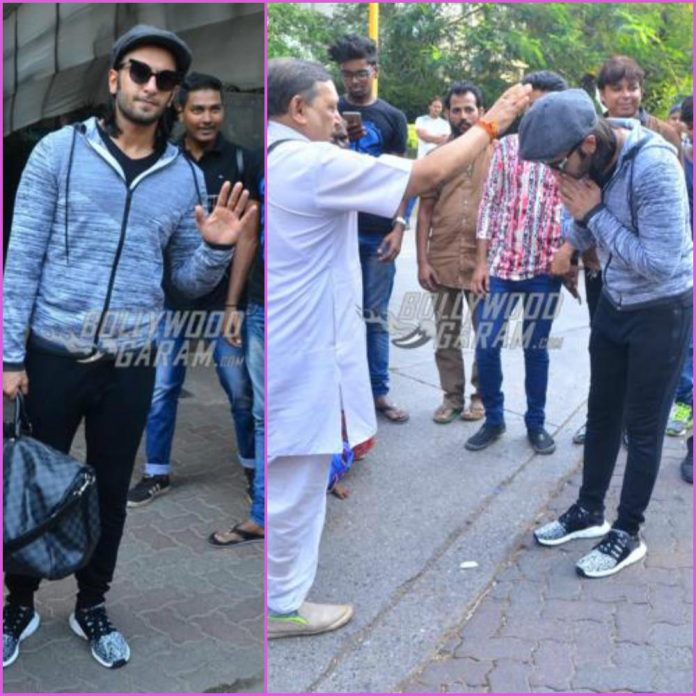 Ranveer Singh is one of the most popular actors in Bollywood. The actor is at present gearing up for the release of the upcoming film Padmavati which also stars Deepika Padukone and Shahid Kapoor. Ranveer was snapped outside a club and came across a priest and sought blessings from him on October 23, 2017.

The Bajirao Mastani actor looked dapper in a black t-shirt with black track pants and a grey zipper jacket. The trailer of Padmavati has shown Ranveer without a single dialogue but has still managed to win the hearts of his fans and audience.

Ranveer Singh in a recent interview with a leading daily talked about his character in the Sanjay Leela Bhansali-helmed film and said, “It was a very difficult character to play. I am a people pleaser, admittedly. I like to spread cheer and laughter. I like to keep the atmosphere light – even if it means making stupid jokes and acting silly and crass. But, when I became Alauddin Khilji for the movie, there’s no trace of that person. Some actors are that way, where the external starts to affect the internal.”

Singh added, “At some point during filming, everybody realized that at one point in the morning you’ll have Ranveer and the rest of the day will be Khilji. My whole energy changed. Which is good, because at least I know I’m doing an honest job in the film.” The film also stars Deepika Padukone who will be seen playing the lead role of Rani Padmini while Shahid will be seen playing the role of Raja Rawal Ratan Singh. Padmavati is ready to be released in theatres on December 1, 2017.

Exclusive photos of Ranveer Singh seeking blessings from a priest in Mumbai!