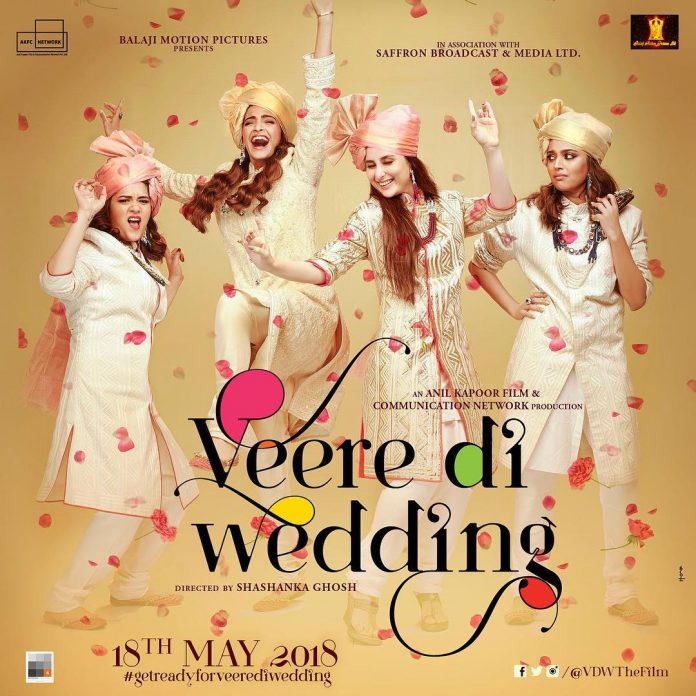 After a long wait, the first poster of the upcoming film, Veere Di Wedding has been unveiled. The poster features the lead actresses Kareena Kapoor, Shikha Talsania, Swara Bhaskar and Sonam Kapoor, who are all dressed as grooms and are dancing their hearts out.

While Kareena, Shikha and Sonam are seen dancing, Swara can be seen looking at them with a puzzled face. The poster has surely indicated that the audience is soon going to be treated with a film which has been stuffed with entertainment. Sonam Kapoor shared the poster and wrote, “Get Ready for Veere Di Wedding #may18 2018 #kareenakapoor #rheakapoor #swarabhaskar #shikhatalsania #sonamkapoor #rheson #norhesonicant #veerediweddingposter”.

The film is directed by Shashanka Ghosh and produced by Ekta Kapoor and Rhea Kapoor. This will be the first time Sonam and Kareena will be seen sharing the screen space. Kareena, in an earlier interview with a leading daily revealed that the film is about her wedding and it is going to be different. The actress also revealed that Sonam’s sister Rhea is going to style her.

Kareena also talked about her son Taimur Ali Khan and said that he accompanies her to the shoot but husband Saif might have to take care of the little one for a few days. Veere Di Wedding is expected to be released during summer 2018.