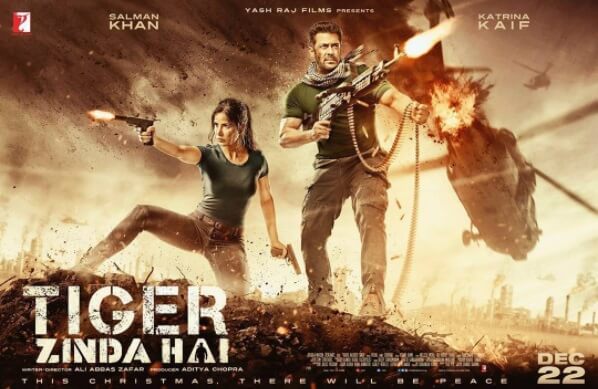 Tiger Zinda Hai is a sequel to 2012 release, Ek Tha Tiger that was a romance-action thriller where Tiger (Salman Khan) played a secret agent of the Indian government

Salman Khan and Katrina Kaif have starred together in a couple of Bollywood movies together from Maine Pyaar Kyun Kiya, Yuvraaj to the more recent Ek Tha Tiger in 2012. Now, the duo has been filming for Tiger Zinda Hai and the first poster of the movie was released on October 25, 2017. Last week during Diwali, Salman shared a photo of himself from the flick but the poster released today shows both the actors in a reveling light in this action-packed film. Both Salman and Katrina are seen wielding their guns at their enemies and the Ali Abbas-helmed film guarantees bringing together some hard-core action film fans who have been waiting for this sequel of Ek Tha Tiger to hit the screens or at least the trailer of the film to be released.

Salman took to social media to share the first look of the movie and he captioned the photo, “Tiger is Back ! #TigerZindaHai @TigerZindaHai.”

Previously, Ali Abbas had tweeted about the film:”Ready to fire 10,000 rounds of fire…the madness begins.”

Katrina plays a spy in the film and has performed on the stunts in the film all by herself and the poster speaks volumes on her hard-core stunt training and action-oriented look. The poster also shows a helicopter that has caught fire in the background while bullets, rifles and pistols are shown making a vivid entry in the poster too.

A leading daily quoted a source close to the film saying, “Director Ali Abbas Zafar has committed to deliver action, stunts and fight sequences that will compete with global standards with Tiger Zinda Hai. To shoot for Katrina’s action scenes, Tom Struthers, the action and stunts director of the film worked with her. Buster Reeves, the fight coordinator of many Hollywood films, also worked with Katrina on this portion.”

The poster that invigorates a scene from a battleground has been shot to completion in September 2017 where some parts of the flick have been shot in Abu Dhabi and the rest in Austria. Reportedly, the lead actors are now shooting for a song in the film in Greece.