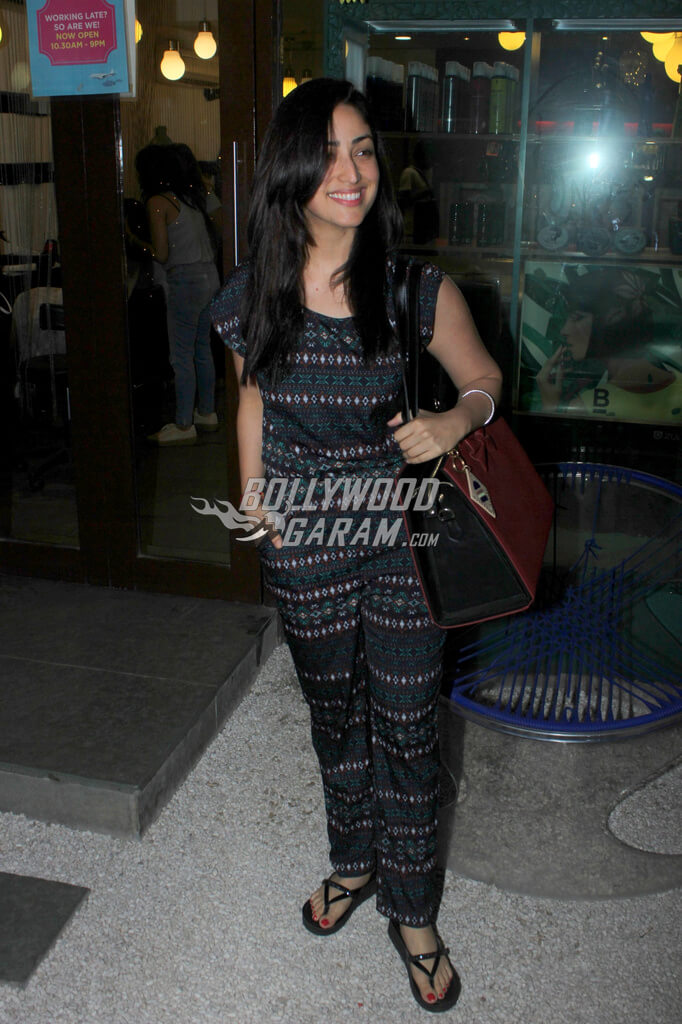 Weekend is almost here and Yami Gautam is already letting her hair down (pun intended) as she was spotted outside the B’Blunt salon. She was snapped in a printed jumpsuit and looked great in open hair and a wide smile with a big handbag.

The Kaabil actress smiled and posed for the shutterbugs when outside the salon. She recently supported her Kaabil co-star Hrithik Roshan in his television statements against Kangana Ranaut and said on her Facebook post, “I am usually not very vocal on social media, but I am making an exception today, since as a woman, what I am seeing right now terrifies me.” She further maintained that “gender card should not take precedence over facts and objectivity.”

The Vicky Donor actress also clarified her position and said, “This is concerning the matter surrounding two of the biggest stars in our industry. I have, fortunately, had the opportunity to work with one of them. However, I am not writing this as a co-star or even as a friend. I am writing this as a woman and a concerned citizen of the country, and I will try to get my point across as succinctly and as objectively as possible.”

For the uninitiated, Hrithik and Kangana have been in a spat for years now over allegations of an affair or the lack of it where both made a lot of accusations, sent legal notices to each other and even made shocking revelations against each other on national television. Hrithik recently said on TV that he has never met Kangana in private apart from their professional relationship on the sets of Kites and Krrish 3.

Along with Yami, many other celebs like Farhan Akhtar, Ronit Roy among others came together to speak in favour of Hrithik, taking to their social media accounts.

Yami, meanwhile was also snapped at the airport on October 24, 2017 while returning from Chandigarh with her sister, Surillie Gautam. Yami has worked in few Bollywood films along with Telugu, Tamil, Kannada, Malayalam and Punjabi films. Her debut Bollywood film was Vicky Donor with Ayushmaan Khurana that was successful at the box office. Later she featured in Action Jackson, Badlapur and Sanam Re. She was last seen with Hrithik in Kaabil where she played a blind girl.