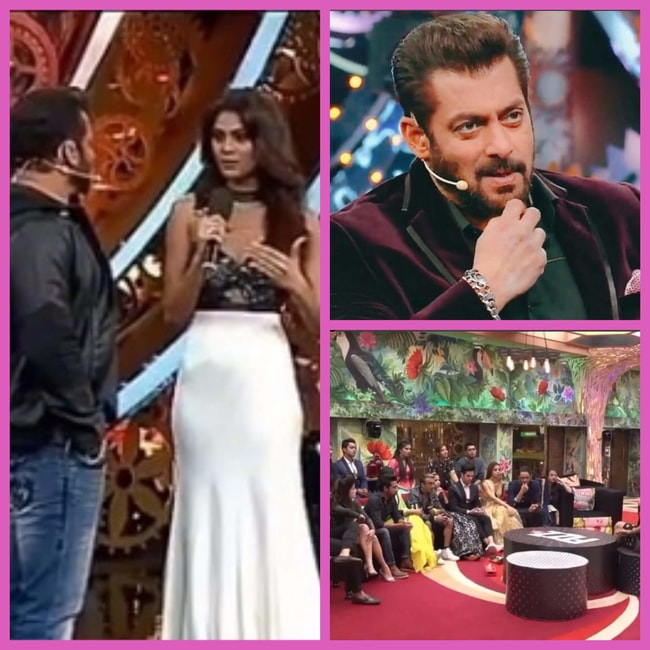 Meanwhile, Dhinchak Pooja who entered the house last week and became quite the Weekend Ka Vaar for the housemates was made to create a rap song about the inmates and after a lot of tear-jerking episodes of the Dhinchak girl, we saw her bringing to the fore bare truths about the inmates in her rap song that other housemate musicians like Arshi Khan and Akash Dadlani helped her put together especially with the lyrics. However, the song struct the wrong note (pun intended) with some of the fellow contestants like Sapna Chaudhary and Hina Khan and arguments began among them. Dhinchak Pooja was named “Badtameez Rapper” after her song ended.

Salman prayed some pranks on Benafsha Soonawalla and tells her that she is being ousted of the show however, she comes back seeing the door locked and then Salman tells her that he did not ask her to leave.

Yesterday’s episode showed contestants guessing the characteristic traits of fellow inmates and playing a game where they guessed the inmate’s name based on those traits.

Priyank Sharma, last week’s wild card entry broke Bigg Boss House rule by letting in some other inmates on Arshi’s past by telling them how to hurt her by mentioning her past scandals to her. He was reprimanded by Salman who was obviously upset with him. Salman warned Priyank and other contestants to not use abusive language or make personal attacks against anyone in the house. Priyank replies that there have been inmates who have said far worse and commented on casting couch among other things. Salman again warned people to not make attacks on religion, caste, gender identity or past issues.

Meanwhile, Lopa and Manu have some insights and advises aboKhan entertaining, they also said that Sapna needs to make more friends in the house and contestants should not be so mean while playing the game.

The Weekend Ka Vaar that started with Salman telling people that he has finally returned from his shooting for his upcoming film, Tiger Zinda Hai in Greece was followed up with revelation of a lot of drama and fights that have been going on in the house, starting with a reveal of fights between Shilpa and Vikas and most contestants trying to get at each other’s backs and trying to know what agonises the other. Sapna and Arshi make personal comments about each other and Salman is forced to intervene.

There is also a tug of war game between Dhinchak and Sapna where Sapna chooses Hiten as her partner while Dhinchak chooses Luv and Sapna wins the game. Moreover, Salman welcomes Golmaal Again stars  – Ajay Devgn, Rohit Shetty, Parineeti Chopra and Tabu. Housemates congratulate the team on the success for their film and this leads to a game where contestants are made to nominate blockbuster, hit and super hit performers of the show. They say Akash is a blockbuster, Arshi a super hit while Pooja is said to be a hit. Salman however adjudges that Akash is a hit, Shilpa a super hit and Hina Khan the blockbuster performer.