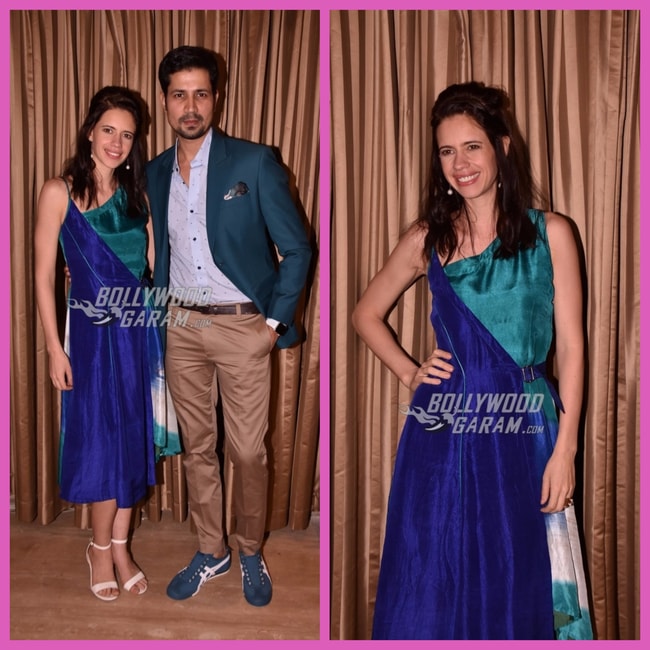 Kalki Koechlin and Sumeet Vyas will star together in a Bollywood film, Ribbon for the first time

Kalki Koechlin who was recently seen in Jia Aur Jia with Richa Chaddha has got her some rave reviews. Despite the movie not doing well at the box office, Kalki’s performance has been appreciated. She will now be seen with Sumeet Vyas of Permanent Roommates and other such web-series fame in their upcoming film, Ribbon.

The trailer of the film showed the story of a married couple (Sumeet and Kalki) who are career-oriented and how their life changes after Kalki gets pregnant. Their story as well as their performances are relatable with most couples living in urban areas.

How their life is upturned and their equation is affected after they welcome a baby girl into their life is what this movie focuses on.

The two ace actors were snapped on October 30, 2017 in a photo shoot ahead of their film’s release. While Kalki was seen wearing an electric blue and sea green dress with heels and matching earrings, Sumeet looked dapper in a white short, beige pants, blue shoes and a blue blazer. Both smiled and posed for the shutterbugs and were seen excited for the film and its expected performance.

Sumeet rose to fame with his first web-series, Permanent Roommates, after which he wrote and starred in TVF Trippling and even wrote Bang Baaja Baraat for Y Films, all of which were huge successes and established Sumeet’s position as an actor and performer, further garnering him fans. Before Ribbon, Sumeet has starred in English Vinglish, Parched, Aurangzeb, Guddu Ki Gun and Kajarya in supporting roles.

A proud theatre artist with most of his fans knowing him for his contribution to the web-series as offering a changing dynamic for the TV-viewing audiences, Sumeet is all geared up for his big Bollywood release in a lead role that is directed and co-written by Rakhee Sandilya, produced by Prakash and Swathi Mondal of Red Cart Films.

Ribbon is slated to release on November 3, 2017 in theatres.

Exclusive photos of Kalki Koechlin and Sumeet Vyas at a photo shoot ahead of Ribbon!