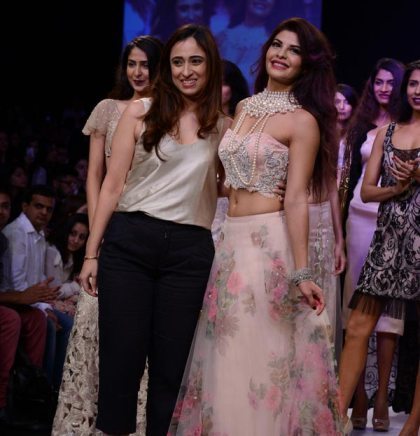 BollywoodGaram.com: Bollywood actress Jacqueline Fernandez dazzled the crowd as the showstopper at the Lakme Fashion Week 2013 on August 24, 2013. The ‘Race 2’ actress walked the runway for fashion designer Shehla Khan on Day 2 of India’s Lakme Fashion Week in Mumbai.

The designer created a mesmerizing powder pink bouillon and lace embroidered corset with a hand painted tulle skirt, accessorized with collar pearl necklace, which the Murder 2 actress wore with style and elegance as she made her way down the runway.

The event was also attended by some of Khan’s clients, including actress Kajol, who was present at the show.