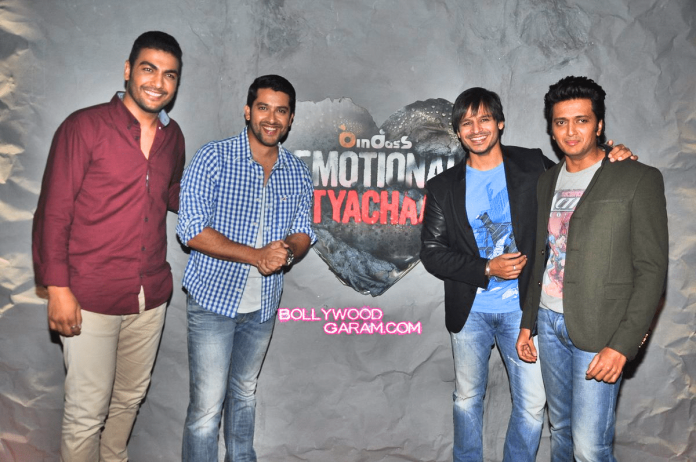 BollywoodGaram.com : Bollywood actors Riteish Deshmukh, Aftab Shivdasani and Vivek Oberoi seem to be the perfect trio in town lately after attending several promotional events for their new movie Grand Masti across Mumbai. Be it college events or film-related launches, these 3 actors evidently share a great bond and pictures say it all.

The trio were recently seen on the sets of TV show Emotional Atyachar on August 25, 2013 along with host Pravesh Rana, where they were also be promoting the new movie”Grand Masti”. Aftab was accompanied to the set by his girlfriend Nin Dusanj.

Besides Aftab, Riteish and Vivek, the movie comprises a host of stars including Sonalee Kulkarni, Bruna Abdullah, Manjari Phadnis ,Karishma Tanna,Kainaat Arora,Maryam Zakaria among other actors,

Grand Masti is expected to release on September 13, 2013.