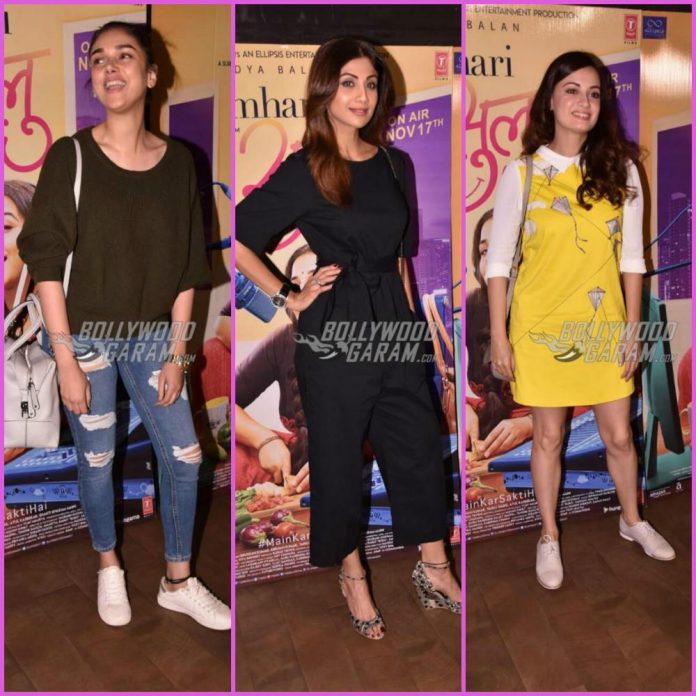 Vidya Balan, who is on a promotional spree for her upcoming film, Tumhari Sulu, hosted a special screening of the film in Mumbai on November 15, 2017. The special screening event saw the presence of Shilpa Shetty, Aditi Rao Hydari and Neha Dhupia. Vidya, for the event, appeared in a black sari while Shilpa was also seen in a black jumpsuit paired with high heels.

Shilpa and Vidya were seen interacting with each other and also posed for the shutterbugs together. Neha, who will be seen as Vidya Balan’s boss in the film, looked pretty in a stylish brown outfit with white sneakers. Aditi was seen in her casual self in a black top and a ripped pair of denims with white sneakers.

The screening event also saw Raj Kundra, Shilpa Shetty’s mother, Sunanda Shetty and sister Shamita Shetty, Dia Mirza, Sophie Chaudry, Chunky Pandey, Jackky Bhagnani and others. Vidya, for a change, will be seen in the fun role of a night radio jockey, who is a middle-class woman. The actress was last seen in the film, Begum Jaan in which she played the role of the madam of the brothel. Actor Ayushmann Khurrana will be seen playing a cameo. The Suresh Triveni-helmed film is ready to be released in theatres on November 17, 2017.

Exclusive photos of Vidya Balan and other Bollywood celebs for Tumhari Sulu’s screening!