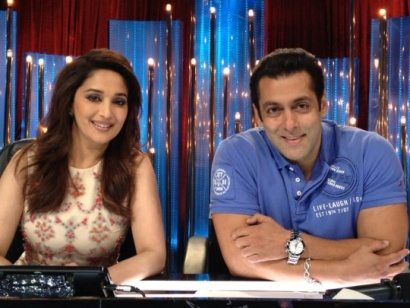 The celebrity dance reality show ‘Jhalak Dikhhla Jaa’ is all set to welcome Bollywood actors Shahid Kapoor, Salman Khan and Ileana D’Cruz. Salman will be appearing on the popular show in order to promote his upcoming reality show ‘Bigg Boss’. The ‘Dabangg’ actor has recently signed up to host the upcoming season of the most controversial reality show in India.

Meanwhile, Shahid and Ileana will be visiting the show to promote their upcoming movie ‘Phata Poster Nikla Hero’. Sources have revealed that Khan will be shooting the promotional sequence for his reality show, which is due to go on air on September 15, 2013. Meanwhile, the dance reality show will have Shahid and Ileana, who have been paired opposite each other in Raj Kumar Santoshi’s upcoming movie ‘Phata Poster Nikla Hero’.

The episode has been shot on August 27, 2013 and will be aired during this weekend, on Saturday, August 31, 2013 or Sunday, September 1, 2013. The judges on the show include Karan Johar, Remo D’Souza and Madhuri Dixit, who has previously starred with Salman in the blockbuster movie ‘Hum Aapke Hain Kaun’. The movie was a huge hit with the audience and made the duo one of the hottest couples in the industry at that time.