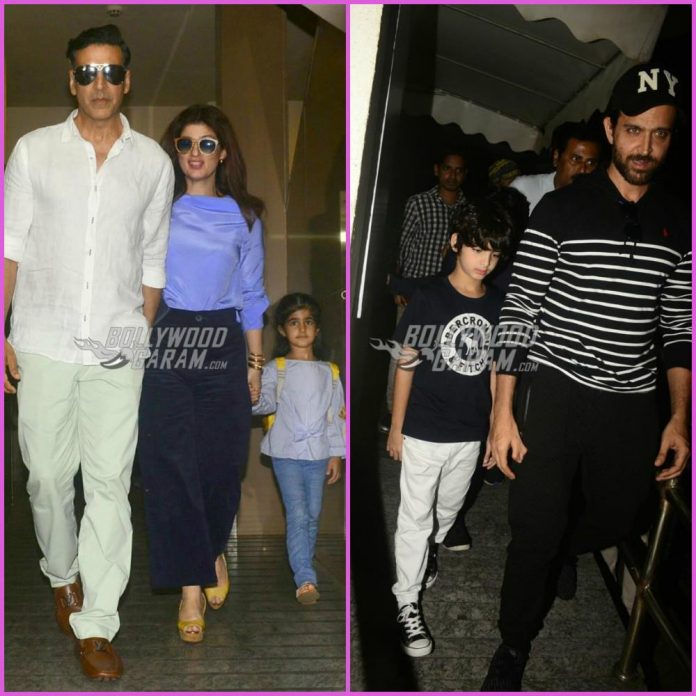 Hrithik Roshan and Akshay Kumar are two celebrities from Bollywood who love to spend time with their family members. The Bang Bang actor along with his son, Hrehaan and Hridaan was snapped outside a movie theatre in Mumbai on November 26, 2017. Akshay was also seen watching the same movie with wife, Twinkle Khanna and daughter Nitara Khanna Bhatia.

The Khiladi star looked dapper in a white shirt and cream pants while Twinkle looked pretty in a velvet wide-legged pant and a sky blue top. Little Nitara looked adorable in a pair of denims and a blue top. Hrithik, on a movie date with his kids looked great in a black and white striped t-shirt and black pants. Sons Hrehaan and Hridhaan were all smiles for the paparazzi.

On the work front, Akshay is busy on his upcoming film, Padman which will mark the first production by wife Twinkle Khanna. The film also stars Radhika Apte and Sonam Kapoor. Akshay, in an earlier interview with a leading daily said, “If this film can spread awareness about menstruation and menstrual health, I would say I have succeeded in my task. And it is not just about menstruation, Padman is the story of an extraordinary human being who pushes himself against his own limitations to go from an illiterate man to an innovator and inventor.”

Meanwhile, Hrithik is working on the upcoming film Super 30, which is a biopic on the popular mathematician Anand Kumar.

Exclusive photos of Akshay Kumar and Hrithik Roshan with their respective families!