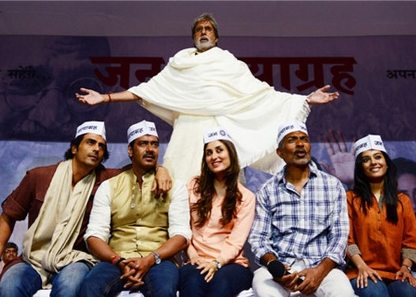 The much-awaited political thriller directed by Prakash Jha, ‘Satyagraha’, has hit the theaters on August 30, 2013. Meanwhile, the makers of the movie have clarified that the new flick is not based on the Anna Hazare movement like it was reported earlier. With a good cast and a strong subject, the expectations were high. Despite the cast and crew’s denials, the movie actually resembles the Anna Hazare movement, but in order to be on the safe side, there are many fictional elements which are added to the movie.

On the other hand, ‘Satyagraha’ has a great subject and has all other ingredients to make a good movie. It features plenty of emotions, which will make the audience feel angry, helpless and even powerless. The bad part is that the fictional portion of the flick does not work, but with a strong cast, the audience can expect great performances from all actors in the movie. The movie’s soundtrack is also one of the bad parts, as ‘Satyagraha’ is a type of movie that does not need songs.

However, this is still a good entertainment movie for the weekend.