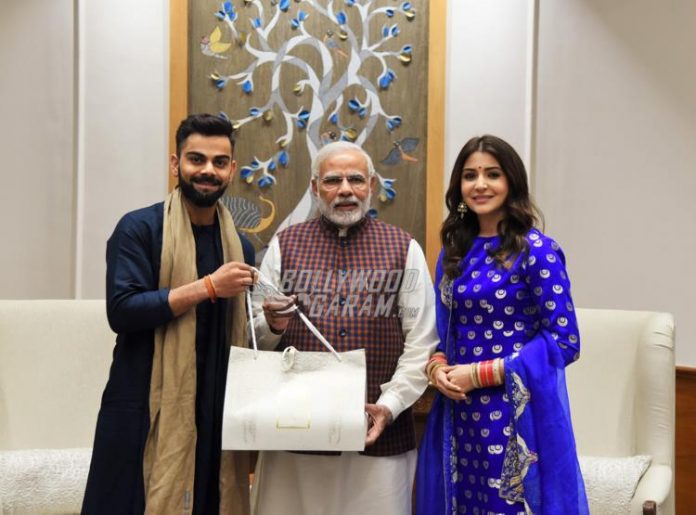 Anushka Sharma and Virat Kohli have been the talk of the town since their hush-hush wedding in Italy. Now that the two prepare for the lavish wedding receptions at their respective home towns, the newly-weds met Prime Minister Narendra Modi. The Prime Minister received an invite from the popular couple and the news was revealed on his official Twitter handle.

The picture has shown Virat Kohli and Anushka Sharma posing with Narendra Modi. However, it is unclear if the Prime Minister would actually attend the wedding reception. The reception is due to be held in Delhi which is Virat’s hometown on December 21, 2017 and the second reception will be hosted in Mumbai, which will be attended by the friends and colleagues of Anushka Sharma on December 26, 2017.

The two celebrities managed to keep their wedding preparations a secret and got married in Italy on December 11, 2017. While Anushka and her family members were snapped flying to Italy, the spokesperson of the actress denied the reports that they are getting married. However, several pictures and videos of the wedding in Italy surprised the fans of the stars.

Anushka and Virat also posted a picture of the two with a backdrop of heavy snow. Another picture of the newly-weds went viral which showed the two interacting with friends and relatives at Virat’s hometown.